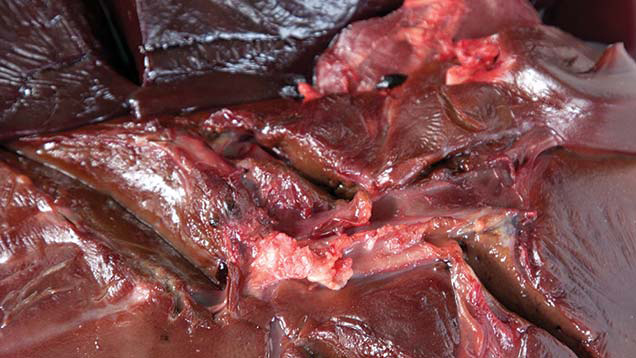 Farmers are being urged to implement a parasite management plan this autumn to prevent production and economic losses caused by liver fluke.

The warning comes after Food Standards Agency (FSA) collated data from abattoirs across Great Britain over the last 12 months, found that one in five cattle livers were damaged by fluke, with the majority occurring in January. It is estimated that such losses are costing farmers up to £30 a head.

Andy Forbes, Control of Worms Sustainably (COWS) technical representative, says it takes two to three months for the liver fluke to develop into adult fluke inside cattle, and the peak found in livers in January, which is a likely result of infections acquired in the autumn.

“Therefore, late summer and early autumn, traditionally known as a high-risk period for liver fluke, is a particularly key time for beef farmers to be proactive in terms of liver fluke management,” warns Dr Forbes.

Prior to treatment, Dr Forbes says farmers need to be 100% clear what they are trying to achieve by using a flukicide. He says there are two reasons for a fluke treatment at or after housing.

Once the goal of treatment is clear, the choice of when to treat and with what is based on several factors, he says.

“These factors include whether resistance to any flukicide has previously been diagnosed on-farm, the class of cattle being treated and consideration of meat and milk withdrawal periods,” he says.

He says this year there has been a marked split in weather patterns across the UK. “This year we’ve seen farmers in the North struggling to get cattle out due to the wet and cool conditions, while in southern England it has been almost drought like, at times, this summer.

“The weather in summer can determine the risk of fluke in the autumn as the snail hosts do not do well in dry conditions. It may be that liver fluke challenge is lower in some parts of the country, but if it was warm and wet in June and July, the challenge could be high.

“There is no one-size-fits-all approach to managing liver fluke on-farm, but implementing a parasite management plan based on recommendations from your vet or SQP, and following the COWS best practice guidelines will help reduce the economic and production losses associated with liver fluke,” says Dr Forbes.

NB: No products have persistent activity