Offered grants to buy bulls, 622 farmers, including 50 with dairy herds, have already signed up to the £2.2m Welsh herd improvement scheme.

A total of 148 bulls have been purchased at an average cost of £4500. While a few Stabiliser, Aberdeen Angus and Hereford sires are included, about 80% are Limousin and Charolais sires.

As well as the 40% grant available on bull values of up to £2500, the scheme also offers members a £70/bull contribution towards the cost of testing the fertility of purchased sires six weeks before they start running with cows, explains project manager Dewi Hughes

Scheme bulls must be in the top 10% of their breed for 400-day growth or muscle depth, and in the top 90% for calving ease. At their first four-hour training session members get guidance on reading, understanding and using EBVs and other performance figures produced by bull breeders.

Participants also get an appreciation of how important visual assessment is when buying in terms of bulls being structurally sound and healthy.

Buyers can also get £500/year towards the cost of performance recording the calves sired. Preliminary results show that steer calves are gaining an average of 1.5kg/head/day and heifers 1.14kg/day, says Mr Hughes. This compares with 1.2kg and 0.89kg for the progeny of non-scheme bulls on the same farms.

“It is early days and we only have results from 900 calves out of beef scheme bulls, so we have to be cautious when interpreting the figures. That said, we are right to be optimistic about the impact high index bulls are having on commercial suckler herds.”

Mr Hughes is convinced the project will show investing in better bulls can boost gross margins by between £40 and £60 a calf.

Clwyd breeder Gwion Owen cannot understand why more farmers have not rushed to join the beef scheme. “It should be obvious to all breeders that our future income depends on producing quality cattle and I am amazed there is still some money in the kitty.”

He is currently grading up his 100-strong Stabiliser cross sucklers, and bought his first Stabiliser bull in 2000 after results from using heat synchronisation and AI proved disappointing.

“Suckler cows are already showing benefits, such as uniformity, improved forage utilisation and better conformation and temperament. Calves grow faster and have improved feed conversion. “Now we have built up numbers we are able to get good prices for replacement heifers and a premium price for steers for finishing.”

The 15-month-old stabiliser bull bought through the beef project in July 2006 cost £3000. His first steer calves are gaining between 1.2kg and 1.4kg/head a day and heifers grow almost as fast. “This is important as Stabiliser group rules say they have to weigh 400kg at 14 months if they are to be bulled.”

Though grading up of the herd will not be complete for another two years, surplus heifers sell well for breeding with one 14 month old heifer realising £1400, he adds. “Grading up has involved operating a replacement rate of 25%, but this will soon be cut to 10% and there will be many more females to sell.”

Having seen immediate benefit from buying a top bull, Mr Owen is following the DNA based Genestar Spark project, which uses tail hair samples to rate cattle by variations in the frequencies of alleles for favourable traits.

He feels the technique could contribute to further improvements in the already favourable marbling and tenderness of Stabiliser beef. “The loss of subsidies means we have to get our income from sales and the beef improvement project will help us do this.” 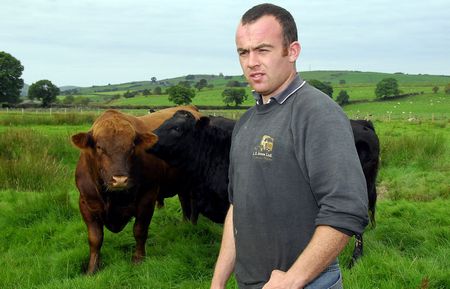