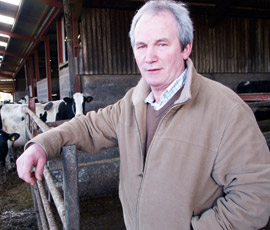 Mr James, who has been tackling bTB on his farm for the past 20 years, has been made an associate of the Royal Agricultural Societies in recognition of his work towards finding a solution to the disease.

Mr James farms 450 dairy cattle and 120 beef cows on the Pembrokeshire/Carmarthenshire border near Narberth, has lost more than 200 animals to bTB in the past 20 years.

As a result he has closely studied the problem of TB and badgers and the prevalence of the bTB in Wales and has used his hands on experience to build a practical knowledge of the disease and, in his role as deputy president of NFU Cymru, to speak on the issue to other farmers, politicians and the press across Wales explaining the implications of the illness for the farming industry.