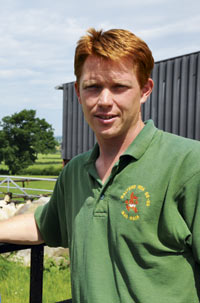 The future of sheep production would have to rely on largely forage-based systems as world demand for grain made cereal-based diets too expensive for sheep, Shropshire commercial farmer Ed Higgins told delegates.

“At the moment we run 1250 ewes on a 200-acre farm and rely on creep feeding to get the lambs away early in the season before grass production slows down. But I’m concious this is unlikely to be sustainable in future if cereal prices rise as expected.

“So, we have to become more reliant on grass and genetics to maximise the grass available. At the moment we’ve divised a system where our ewes and lambs spend five days on a paddock before being moved on to another one. But it’s not a complicated system with a myriad of paddocks. Each group is allocated a paddock which is split in two by electric fencing and they simply swap from one half to another every five days or so.”

However, ceasing creep feeding at the moment would mean dropping ewe numbers by 50% which was not sustainable at the current time with both Mr Higgins and his father drawing a wage from the business.

Average paddock size in the system is about 2.83ha (seven acres) and these accommodate about 120 ewes and their lambs. “This system means ewes graze when grass is at its best and it forces them to graze fields evenly. Harder grazed areas are also able to recover, and grass growth which is likely to exceed intake can be spotted earlier enabling silage to be made.”

Swards are largely made up to high sugar grasses which are spring sown after over-wintered stubbles, while ewes are outwintered on stubble turnips grown on a neighbouring arable unit.

And, looking further to the future Mr Higgins said it was likely, if climate change predictions held true, that sheep farmers would benefit from a longer grass growing season and different forage crops. But, these are likely to be countered by the challenge of new parasites and diseases and increased competition for land.