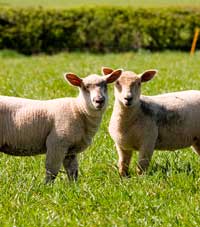 On a farm where finishing lambs as early as possible is the name of the game, a steady increase in finishing date was something that needed to be addressed.

One of the main changes Anthony Pearce, Moat Farm, Stoke Mandeville, has made has been in his approach to grassland management.

“Because we lamb early at the beginning of February, grass supply in the first two to three weeks of April is often scarily low,” says Mr Pearce.

One of the main suggestions made on the day was to improve grass quality by increasing stocking density and reducing field size.

“The time period meant I didn’t have enough time to increase sheep numbers, but I have taken on 40 yearling cattle over 28ha (70 acres) and reduced field size to try and combat the problem.” This has increased stocking density from 5.74 ewes/ha to 15.18 ewes/ha.

“Sheep farmers tend to steer clear of technology, but I have to say I have been suitably impressed with the grass plate meter, which I use once a week to plan the grazing rotation.

“I did a bit of a test comparing set-stocked grazing to rotational grazing, and the lambs rotationally grazed definitely finished earlier.”

“I was worried I would be selling myself short by taking land out.” However, by improving grass quality, Mr Pearce has finished a proportion of lambs earlier than last year.

“My speciality is finishing lambs early to take advantage of premium prices and, this year, I have managed to finish some lambs a week earlier than last year.

Efficient use of time is something taken seriously at Moat Farm. The sheep flock is run as a secondary enterprise to a large arable unit so the amount of time spent a sheep is really important.

Advisers suggested a move from a 13.5% home-mixed feed to 18% cobbs to address the problem of trough area and low feed protein levels.

By taking this advice and continuing to feed cobbs for two weeks longer than last year, not only have his ewes had access to better quality feed and subsequently improved milk production, but Mr Pearce has also seen marked improvements in labour efficiency.

“The pellets mean sheep can feed directly off the ground,” says Mr Pearce. “This didn’t make much difference when sheep where outside, but in the two month period ewes were housed, I managed to cut my time a ewe from 75mins a ewe to 45mins a ewe.” This 30-minute saving was put down to a combination of changing feed practices and the installation of an automatic watering system.

As a result of better grass management, the higher protein feed and a new planned anti-coccidial treatment regime, Mr Pearce aims to reduce the number of days it takes to finish a lamb evem further to less than 100 days.

The suggestion of grazing an alternative forage crop to extend winter grazing has also been taken on board. “I have put 22 acres aside for a rape/kale hybrid this winter.”