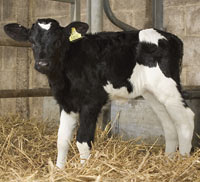 Researchers are seeking help from farmers’ to try and explain a sudden upsurge in the little known but fatal ‘Bleeding Calf Syndrome’.

The disease affects calves aged less than one month old with infected calves having a persistent fever with bleeding from the nose, gums, ear-tag holes and injection sites. There may even be intestinal bleeding with calves passing dark, tarry dung.

Scientists at SAC, Royal (Dick) Vet School and VLA are trying to discover what lies behind the syndrome and are offering free post mortems to farmers and vets that have suspected cases.

They are also keen to receive blood samples from suspected live clinical cases from which analysis would be carried out free of charge.

Up until the end of August there were more than 25 confirmed cases from 18 farms in Scotland, with 90% of these in suckler herds. Cases have also been seen throughout England and Wales, although these have been almost exclusively in dairy herds.

The cause of the bleeding syndrome is unknown, but poisoning, genetic abnormalities and drug reactions are being considered.

Most calves are growing well before showing clinical signs. However, limited studies suggest calves were abnormal from birth. While some calves can recover, many die suddenly, before bleeding is seen.

The advice to all stock-keepers is to be vigilant and to investigate any case of unexplained bleeding or sudden death in calves less than one month of age.