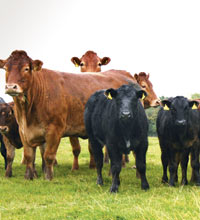 A team of about 15 British Blue bulls are run with the 320-suckler cows owned by John and Peter Hall at Dalston, Carlisle – but this is a herd where selecting sires that achieve the correct balance between muscularity and mobility is as much to do with how a bull is bred as how it looks.

The Hall family were among the early converts to the “Belgian Blue” and over the years have personally selected many bulls in Belgium as they sought the extreme muscling that has been the breed’s hallmark.

But even for a crossing bull the breeding is important – even if a bull really appeals visually, says John Hall. “The pedigree can tell you a lot that you can’t see, but this is a breed that’s all about muscle and shape and we’ve had bulls with outstanding conformation that haven’t had the best legs in the world, but have worked perfectly well.

“A sickle-hocked bull can be as good as one with straight legs. If a bull’s hocks are straight you can have more problems over time than if you had a bull that’s a little bit crooked in his hocks. He may not be the best looker or the best walker, but in our experience these bulls still work well and get cows in-calf,” says Mr Hall.

The family’s cows run on land up to 1000ft, but the Halls say British Blue bulls in their experience have been no less mobile or able to serve cows than any other breed – despite their preference for sires with exceptional muscle.

“There’s a big difference between a bull walking soundly and a bull walking well. A bull that walks in a way to win in the show ring is different to a bull that may not walk as well, but has the potential to produce exceptional calves.

“Striking a balance between muscularity and mobility is definitely achievable for hill farmers considering using a British Blue bull. There should be no reason to compromise shape by selecting a less well muscled bull on the assumption it will be more active and serve more cows compared with a bull with extreme muscle that may not be quite as correct.”

From 800 calvings over three years at Inglewood Edge there have only been six Caesarians – and five of those were for twisted wombs.

The Halls, who sell 10-12-month-old suckled calves, believe British Blue breeders should continue to concentrate on the conformation advantages the breed can pass on to hill-bred suckled calves – but they’d like to see more bulls sold at around two years old and grown more naturally.

“We wouldn’t resist buying a bull that had extreme muscling because we thought it would affect his mobility or his ability to serve cows; neither would we resist buying a less extreme type of bull because we feared he may not produce me well-shaped calves,” believes Mr Hall. 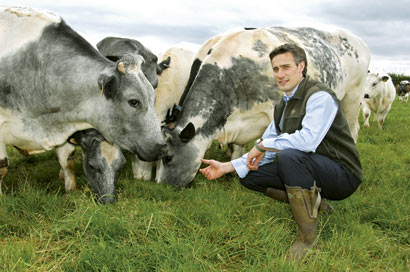 Lancashire farmer and British Blue breeder Philip Halhead says there are plenty of bulls on the market that are “muscled and mobile” and ideal for use on sucklers running on the hill – but buyers need to be selective.

“The nature of the breed is that we aren’t over-supplied with bulls, so farmers who are buying to a price can often have to make a compromise on muscularity, legs and locomotion when selecting a bull.

“Over the last six years we’ve seen changes in the breed and we’ve now got plenty of big, mobile bulls that are fit for purpose – and they are producing commercial progeny that are equally so in terms of how they finish.

“In the past the breed has had some extremely muscular bulls, but they haven’t all been good enough on growth, legs or fertility,” says Mr Halhead who runs Norbreck Genetics at Cockerham, Lancaster.

Running a leading AI stud team of British Blue bulls, he believes the British Blue – by nature of its conformation – will always present a challenge to breeders as they strive to retain shape and still produce commercial bulls with good mobility.

“It’s a constant challenge, but correctness as many cattle breeders perceive it can be difficult to achieve when your market is demanding bulls with exceptional muscle development. All breeders are trying to breed the next bull that will have a big impact on the breed – but not an any cost.

“For me a bull has to walk correctly – it’s always been a top priority, but there are bulls in the breed that haven’t got particularly good legs and yet are not passing that trait on to their progeny.

“To appeal to suckled calf producers the British Blue bulls of the future must offer a range of criteria – power, locomotion, fertility as well as depth of breeding. And suckled calf producers looking for crossing bulls should also look closely at a bull’s back breeding and study its female line closely,” he warns.