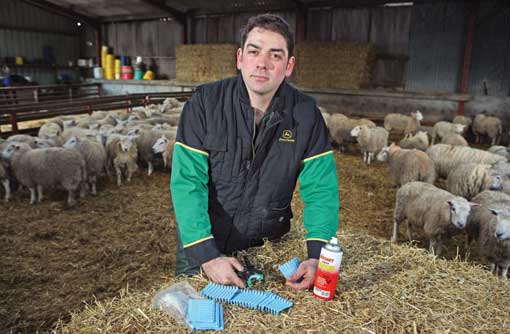 In a bid to improve the performance of his 1,000 Texel Cross Lleyn ewe flock Tom Jones, from Lake Vyrnwy, Montgomeryshire, has decided to stop swimming against nature’s tide and start working smarter, not harder.

It is this simple ethos that led him to reassess his breeding policy three years ago and start breeding for simplified sheep management.

His objective is to produce ewes capable of rearing two lambs each year, which are easy care.

“I want to make life a bit easier. Sheep farming is hard enough at the best of times,” he explains.

An integral part of this has been making the best of what the farm has to offer by maximising output from grazing.

“It’s not only our cheapest resource, but using it will help to reduce our reliance on feeding ewes concentrates. It removes an ever-increasing cost from lamb production. Not only should we be making the most from grass, we should be producing animals that are able to perform from our poorer grazing areas.”

Previously the flock was made up of Mule ewes, which were crossed to a Texel terminal sire. But replacement rates were high and ewe performance was disappointing.

As a result, Mr Jones decided to introduce the Lleyn breed, which he favoured for its prolificacy, smaller size, mothering ability and level of hardiness – all of which makes it suitable for the farm’s upland landscape, where ground peaks at 1,000ft.

Now the flock is made up of predominantly Lleyn cross Texel ewes, although in two years’ time these should be nearing three-quarter Lleyn bred.

Most ewes are mated to high-scoring EBV Texel sires in the autumn, which produce fat lambs for the following season. Meanwhile, Lleyn tups, within the top percentile of the breed, are used to produce 250 replacement ewes each year.

Under this new approach a strong emphasis has been put on maternal health traits.

An aggressive policy has been adopted to reduce lameness, with Mr Jones now operating a “two strikes and you’re out” policy.

Any ewes infected with foot-rot or other chronic foot infections are identified, treated and ear marked, to make it easy to identify repeat offenders.

“Normally if a ewe doesn’t recover from any form of lameness after one treatment she is culled at the next available opportunity,” explains Mr Jones.

Two years ago the flock had a lameness incidence of 10%, but this has since been reduced to less than 5%.

Mr Jones says he would like to reduce this even further, although he says he’s already been rewarded for a reduction in problem cases with less work and increased productivity.

“Gathering and treating lame sheep is a time consuming task that can be avoided by culling these ewes. Having ewes that are sound on their feet also ensures they’re also performing. A happy ewe is a profitable one.”

Mr Jones has also embarked on a strict regime when it comes to parasite control, culling all chronic cases of dirty ewes. “We never really tail ewes in spring or in the autumn anymore.”

Instead he shears later in June and any dirty sheep will get earmarked and will get sold as cull ewes.

“If they aren’t getting dirty it’s half the battle because you don’t need to worry about fly strike,” he adds.

Ewes and tups are treated twice a year for fluke; two weeks pre tupping and again in January. Faecal egg counts are carried out pre- and post-treatment

Any sheep with high egg counts or clinical signs of disease after treatment are sold as part of a wider plan to build up resistance within the flock.

The same strict stance is taken on lambs. “We do faecal egg counts on the lambs from six weeks of age and worm accordingly.”

Lambs are then turned out on 2.4-3.2ha paddocks for 28-48 hours post-treatment, before being turned out on to fresh pastures and wet, boggy fields are avoided at all costs.

In a year where fluke levels have been unprecedented the approach has paid dividends and there have been very few clinical cases.

At lambing time individual ewe performance is noted, with preference for breeding females favouring twin-rearing ewes that lamb unassisted and have plenty of milk for newborns.

“Labour is a massive cost, especially at lambing time. If you can keep more sheep a person and lamb more, it’s a big cost saving,” he says.

Last year’s lambing records reveal fewer than 10% of the ewes were assisted at lambing, but this figure is improving year on year.

The flock is lambed indoors between February and April. The ewes and lambs are then turned out onto fresh pasture, weather permitting. But in order to make life easier and reduce costs Mr Jones plans to postpone lambing until later in the season and lamb everything outside.

He believes mothering ability is a fundamental trait in helping to achieve this goal.

Key to the success of the breeding policy, according to Mr Jones, has been manually recording problem sheep. “When it comes August and you are starting to get ready for tupping again they might look a perfectly good ewe and you can’t remember why you marked them.”

Instead he says recording cuts out the “guess work”. By next lambing season Mr Jones hopes to have an EID reader in place to streamline paperwork. “We’ve got to have the tags anyway so you might as well make the most of it, and if you’re picking up on problems it will pay for itself.”

This year Mr Jones has widened his breeding pool, which means he can afford to be stricter when selecting breeding females.

He has kept back 300 breeding ewes, of which about one quarter will be deemed unsuitable and culled as fat lambs, he predicts.

“We’ve been culling quite a high number over the past couple of years so we’ve had to keep more than we would like,” he admits.

This “no passengers” approach to culling means over the past three years Mr Jones has eliminated approximately 30% of his flock.

But he has seen a dramatic improvement in flock health. “At first it was a daunting task culling seemingly good ewes, but in the long run it’s been worth the sacrifice and we are reducing the poorer ewes year on year,” he says.

This determination to improve flock health has been spurned by Mr Jones’ insatiable drive to improve business performance.

“We want to produce lambs as cheaply and efficiently as possible and this is one of the best ways of doing it.”

Mr Jones says more precedence needs to placed on flock efficiency rather than visual appraisal. “Too much emphasis is placed on the look of sheep when this has little impact on the profitability of a commercial flock.

“A ewe can look as nice as it wants, but it doesn’t mean it’s going to perform well.”

Instead, he says it’s all about maximising the amount of kilos produced an acre.

The Lleyn breed has also been an integral part of this drive for efficiency.

With the ewes averaging just 70kg compared to a 90kg average for mules, Mr Jones says they require less feed and maintenance.

“After weaning they [Llen ewes] will do well off some of the poorer ground, which frees up better grazing for lambs,” he adds.

“Many farmers seem oblivious to the fact these larger ewes don’t wean any more kilos of lamb than a ewe a third of its size, despite needing much more upkeep.

“All that extra weight is hard work and you are not gaining anything by keeping an extra 20kg.”

Despite Lleyn cull ewes averaging about £20 less than Mule ewes, he says their prolificacy more than makes up for any lower cull price.

“The weaning percentage has gone up by 20% so we’re selling more kg of lamb to start off with.”

All fat lambs are sold straight off grass at Welshpool market averaging about 36kg. This year’s first draw of lambs averaged £2.60/kg live weight. Although this year’s bad weather meant some lambs had to be creep fed, Mr Jones says he hopes breeding for more efficient progeny will help reduce this trend in the future.

“The main aim is to cut out concentrates completely and finish everything off grass,” he adds.