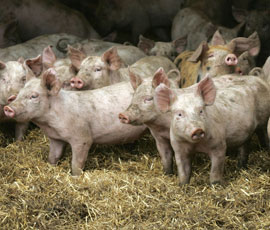 British retailers and caterers have vowed not to sell pork products from illegal pig farms when the European partial stalls ban is introduced next year.

During a meeting with DEFRA farm minister Jim Paice this week, representatives from the retail and catering sector said pork from farms which failed to comply with the ban would not appear in supermarkets, restaurants or in brand-name products from 1 January.

The pledge by organisations including the British Retail Consortium and the Food and Drink Federation came as 18 out of 27 member states said they expected to be fully compliant with the ban by the time it comes into force.

The European Commission had previously expected just a third of continental pig producers to meet the January 2013 deadline.

“It’s a pity that not everyone is going to be compliant by the deadline but from the perspective of the UK pig industry, all of our main competitors will be.”
Jim Paice

The ban will bring other member states into line with Britain, where sow stalls have been illegal since 1999.

The UK has been pressing the commission to ensure the ban was enforced across the EU to ensure British farmers were operating in a fairer market place.

Mr Paice said he has promised to push Brussels to be as robust as possible and welcomed approaches being taken to enforce welfare standards across Europe.

“It’s a pity that not everyone is going to be compliant by the deadline but from the perspective of the UK pig industry, all of our main competitors will be,” he said.

Denmark, Germany, The Netherlands and Belgium have all informed Brussels that their industries will be fully compliant with the ban by the end of this year.

Meanwhile, Poland expects 94% of its pig industry to have done away with sow stalls by the time the ban comes into force.

Richard Longthorp, National Pig Association chairman, said moves to enforce the ban and the promise by retailers and caterers not to use meat which did not comply was excellent news for British pig producers.

He said the industry would now discuss the pledges made by retailers and caterers in more detail to ensure they would be honoured.

British producers would be ready to prevent unnecessary price rises for consumers by providing any additional pork required – but they would need advance commitment from retailers, he added.

The 18 countries expected to meet the 1 January deadline:

In addition, some 95% of Austrian farms are expected to meet the deadline, as are 93% of Finnish farms, 93% of Greek farms, 94% of Polish farms and 95% of Slovenian farms.