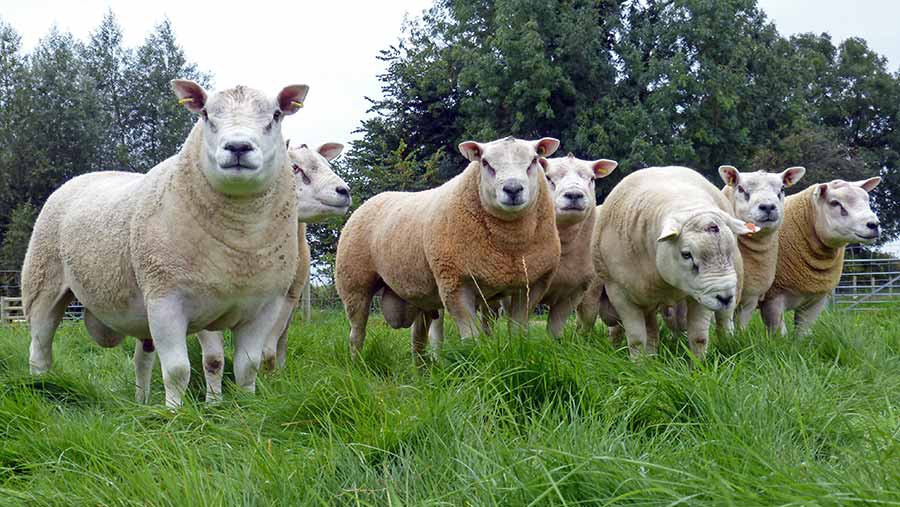 Two brothers have built an 800-head breeding Mule ewe flock along with 500 dry Texel-cross lambs on grazing acquired solely through a combination of short-term rents and grazing licenses and without a penny of subsidy.

More than 485ha of grassland and winter keep are managed by Rob and Matt Harrison, who grew up on Two Mile Ash Farm, Milton Keynes, Buckinghamshire.

Their desire to farm away from home started early as they realised there wasn’t enough work on the county council holding that made a living for their father and uncle.

As well as testing their farming ability, the business, which involves working with more than 50 landlords, is testament to their people skills.

But the sheep farming is not a full-time concern yet. Rob works on local dairy units, milking, carrying out pregnancy diagnosis, artificial insemination and tuberculosis testing work.

Matt is a contract shepherd, fencer and has a shearing round of 30,000 head.

The original flock started out as five sheep kept at home in 2008 when Matt was 14 and Rob was 17. They continued to grow their sheep numbers and registered as a partnership the following year.

The partnership was given momentum in 2012 when 16ha of grazing and two lambing sheds were acquired on nearby Chantry Farm, an 18,000-bird layer unit.

This became a base to store equipment and lamb sheep and provided eggs, which Rob and Matt still sell today as part of a small business retailing local honey, apple juice and lamb to help cashflow.

Flock numbers continued to grow as paddocks and winter arable keep was acquired, including a sizeable portion of grazing on the Wakefield Estate.

“We don’t have any grazing on formal tenancies,” explains Rob. “A lot of the land we farm is on good faith and in many cases they are keen to have us grazing it to keep the land in good order.”

Much of the grazing has been picked up by cold calling properties after seeing ungrazed fields while out shepherding or on route to shearing jobs.

Shearling North of England Mules are bought from the same few holdings each year. “It is important to us to buy the right type of breeding sheep; plenty of size and capable of carrying multiple lambs,” explains Matt.

The Mules are all crossed to Texels bought from performance-recorded breeders at Kelso tup sales. Sires are selected in the top 10-20% of the index, with bidding going up to £1,200 a head.

Females are picked out to sell as Texel-cross shearlings at Thame Sheep Fair, where the Harrison brothers sell the largest run of Texel-crosses on the day.

“Our repeat purchasers are a testament to the Texel-Cross breed,” says Matt. “It is important for us to buy the right type of breeding sheep; plenty of size and capable of carrying multiple lambs.”

The 800 Mules lamb in two 400-head blocks, one cycle apart, at Chantry Farm from 1 March. A 49x9m polytunnel acts as the first holding shed, with a former laying shed (49x12m) then housing ewes and lambs for 24 hours after birth, with room for about 500 ewes across the two sheds at any one time.

Scanning hovers at about 210-215%, with close to 190% sold. To reduce feed costs and mastitis problems, ewes are never turned out with triplets.

Adopter pens are used to ensure as many ewes go out with twins as possible, any spare lambs not needed for adoptions are sold.

Single-bearing ewes receive ad-lib haylage, while twin- and triplet-bearing ewes are built up to 1kg of cake a day for three weeks before lambing. This is gradually reduced during the three weeks post lambing.

Flock longevity is pleasing the Harrisons, with ewes expected to average six crops and some lambs bought in 2009 going to the tup this year.

Lambs receive clostridial vaccines at three and six weeks and faecal egg counts have saved dozens of drenches over the years.

They sample 10 lambs in each grazing group every two to three weeks through the height of the parasitic season. Orange drenches are used strategically on bought stock.

Matt and Rob have their own microscope to monitor parasite burden and are constantly in touch with Towcester Vets, which advises them on actives, flock health and egg counts.

Texel-cross shearlings are sold at Thame

How does your partnership work?

Rob: “We operate an equal partnership and are both self-employed, so we balance the workload between us – maintaining good contact is vital to that. While I am busier in the winter months when the cows are in on the dairy unit where I work, Matt is busier in the summer months shearing, so our work away from the sheep balances quite well.”

Rob: “Keeping our landlords happy is as important as keeping the sheep happy. We couldn’t farm as we do without them, so it’s essential that we maintain good relationships and always respect what they want.”

What are your main costs?

Matt: “Diesel is our biggest cost. With so much travelling this is bound to be the case. But with the purchase of a quad bike and more efficient vehicles we are helping to drive down these costs.  We try to block graze as much as possible to reduce shepherding costs.”

What would your advice be to someone starting in sheep farming with no land?

Rob: “Just go for it. If you are running a system like ours then you feel as if you never have anything concrete and dependable, but you can’t think about that too much. Sheep farming doesn’t need a huge amount of capital investment, so by subsidising it with off-farm work you can grow a business without getting into debt.”

“Always be prepared to learn. Sheep shearing ives you an opportunity to learn about different systems,” says Matt. “Never be afraid to ask questions. Learn form other people’s mistakes.”

What have you learned you can’t do without?

Rob: “Good electric fencing means you don’t lose sleep worrying about sheep getting out grazing up to 40 miles away. Using two breeds – the Texel and the Mule – means management and feeding are kept simple.”

Matt: “We have learned it is important to start with good breeding sheep.”

Rob: “Expansion is our main focus but to achieve this we need more land. We are constantly trying to improve the Texel shearlings we breed and make them more uniform. We shall also strive to make our business a efficient as we can.”

Sound electric fencing is essential to keep stock in and intensify grazing where possible. All batches are rotated around on a paddock-based system, with at least four fields available to each batch.

A flail and spot sprayer are used to control weeds on poorer fields, which, when combined with the grazing of the ewes, improves pasture quality.

Ewes feeding twins are generally stocked no higher than two-and-a-half to three ewes per acre on the permanent pasture in summer. Most winter keep is large blocks of arable land.

Lambs are finished on forage only, consisting of cereal volunteers, turnips or rye – a popular crop for AD units in the area.

Miles of electric fencing is powered by 20 leisure batteries, which are recharged after two days of use. They need to supply water to some fields, which is done by using an IBC and water pump to blast 1,000 litres of water into the in-field plastic containers each time.