The discovery of Bluetongue virus strain one (BTV1) on a farm in Blackpool last week has shot the disease back up the farming agenda. But with no cases of strain eight (BTV8) reported in the UK this year, many are questioning the need for vaccination next year.

However, anyone wanting to ensure their stock remains free of the disease should continue vaccinating for the next three years, warns Alasdair King, Intervet Schering Plough’s vet adviser. “Seeing no new cases this year doesn’t necessarily mean the disease has been eradicated. It’s likely there have been sub-clinical cases and possibly unreported cases, so vaccination next year is essential.”

When to vaccinate, though, is a more tricky question to answer and Mr King says the ideal time will be different for every farm. Farmers should discuss their plans with their vet to ensure they vaccinate stock at the optimum time.

For early-lambing flocks, the decision is relatively straightforward, says Mr King. “Flocks lambing from now to February should have plenty of time after lambing to vaccinate both ewes and lambs before midges become too active.

“Therefore, they should continue with their normal pre-lambing vaccination plan to prevent clostridial diseases before lambing and then plan bluetongue vaccination for after lambing. Ewes can be vaccinated at any point and lambs should be done from three weeks old onwards, so they should be vaccinated well before midges become active again,” he adds. 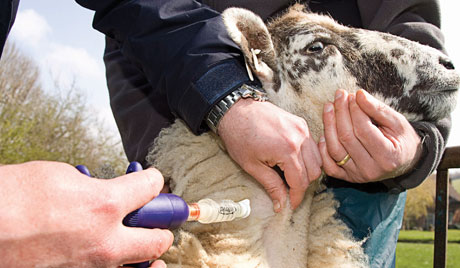 There is little point vaccinating these ewes before lambing in the hope that maternal antibodies will be passed to lambs in colostrum, as these antibodies will have worn off before the disease threat is maximised next spring. Also, there are no research results from trials involving using Bluetongue vaccine with other vaccines, says Mr King.

“But for later-lambing flocks, there should be more information on the possibility of using clostridial and Intervet Schering Plough bluetongue vaccines together. The initial results of this work look promising, but it is too early to make definite recommendations,” he adds.

“If maternal antibodies are transferred to lambs, then I would still recommend giving lambs bluetongue vaccine at three weeks old. However, it may also be necessary to give a further shot at three months old in case the maternal antibodies have interfered with the first vaccine dose.”

For beef and dairy herds, the situation will be even more complex, as there is a wider range of other vaccines that could be given and so the interactions between vaccines won’t be as clearly researched. “The best option will probably be to do both cows and calves post-calving and in cows vaccinated this year one booster vaccination should be sufficient for immunity.”

Mr King says it is important to bear in mind the stress that handling and vaccination places on stock, making post-calving and lambing vaccinations a safer option. “It is clear that in France, where the vaccination programme has been rolled out with limited success, there has been a massive number of outbreaks. Whereas in Holland and Belgium, vaccination has been successful. Anyone considering not vaccinating next year should look a the French example and take heed.”