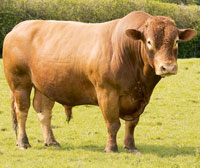 Buying a bull is easy, but making sure he gets cows in calf in a compact breeding season – and for several years – is more difficult, says Norman Weatherup, beef technologist for CAFRE.

However, by thinking about disease status, key characteristics and management post-purchase, it is possible to achieve desirable fertility performance.

“Bulls are often purchased with little or no thought given to health status,” warns Mr Weatherup. “Purchasers should pay special attention to the health status of the animal and think through the implications for their own herd.

“For example, BVD is a widespread disease with massive potential to disrupt fertility.

“When a bull comes from an accredited free herd, it will never have been exposed to the BVD virus. If the bull becomes infected in the purchaser’s herd, he will recover and become immune, but he could be infertile for two-four months, just when he was really needed.”

Ideally, the purchaser should have the herd screened and vaccinated before buys any animals and the new bull should also be vaccinated before he joins the herd. Make sure all booster injections are administered according to manufacturer’s instructions and that vaccines are handled carefully.

In the case of Johne’s disease, it is pointless testing a young bull under two. Even if a bull does have Johne’s, he may test clear at this age, only for the disease to become apparent later. The best approach is to purchase from an accredited Johne’s-free herd.

Scrotal circumference is easily measured and is closely related to both volume of semen and the percentage of normal sperm cells. Research has also found a strong genetic relationship between scrotal circumference in bulls and the fertility of their daughters as measured by age at puberty.

The minimum industry requirement established for 12-14-month-old bulls across all breeds is a scrotal circumference of 30cm. Avoid bulls that do not meet the minimum standard.

When to buy a bull?

A bull is often bought a short time before he is turned out with cows. Because many farmers only select breeding stock by eye, pedigree breeders cannot be blamed for turning stock out as well presented as possible. This means young bulls are often fed intensively to achieve the highest weight gain and fat cover possible.

While these young bulls will look well on sale day, the fat deposited around the neck of the scrotum may adversely affect sperm production for the rest of their lives. Their feet may be damaged and they may not be able to mate as many cows as they should. Often these bulls are turned out to too many cows and too little feed so that they lose a lot of weight in a very short time which also adversely affects fertility. Clearly it is better to buy a bull before he gains excessive condition or else at least three months before he is needed to start serving cows to allow time to return to moderate body condition.

Young bulls are sexually inexperienced and ideally a mature cow should be taken to him, allowing him to serve her several times. Bulls should be penned where they can at least see cows, if not other bulls working. Young bulls are enthusiastic, but have low semen reserves and hence they should not be run with too many cows. A guide is one cow for each month of the bull’s age, so 18 cows could be run with a bull of 18 months.

About 20-40% of bulls could be temporarily infertile or permanently sub-fertile while others may appear to mount cows, but fail to deposit semen correctly.

• Have a bull in fit, not fat, condition before turning him out with cows

• Buy a bull at least three months before he is to be used, and ideally as early as possible

• Ensure that a purchased bull comes from a herd with at least the same, if not higher, health status than your own and that all vaccinations and health treatments are completed well before breeding season