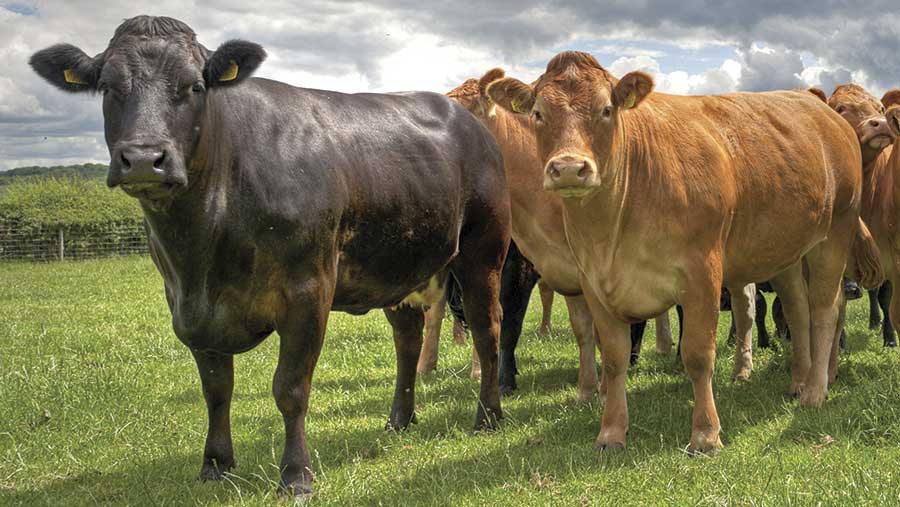 Bovine viral diarrhoea (BVD) is widespread in beef and dairy herds and represents a significant drain on the UK cattle industry, with Reading University putting the total cost at £61m/year.

Its effect is far-reaching, causing reduced fertility, abortion and pneumonia.

Farmers Weekly and Boehringer Ingelheim hosted a roundtable at the Crowne Plaza, Birmingham, just one week after the BVD-Free launch to discuss what must happen next to ensure England and Wales successfully tackle the virulent virus.

Farmer and industry engagement is key to ensuring the success of BVD eradication programmes.

Critical to making sure farmers sign up to the scheme is spelling out the financial reward of being BVD-free, beef farmer Paul Westaway believes.

“Until farmers see the financial benefit we will struggle,” he said.

A big part of this is creating a financial reward for BVD-free animals at market, which is already apparent in northern England.

Chris Dodds and Chris Mallon reported strong premiums of £50-£60 a head for BVD-free cattle at these northern marts.

Vet Oli Hodgkinson said in England and Wales calf rearers have an important role to play in kick-starting this and Mr Dodds added that market buyers need to be made to feel more confident in asking questions about the health status of animals at market.

He also believes local champions should spread the word about the benefits of being BVD-free.

“Eventually we want auctioneers to put tag numbers into the BVD websites and find out their status.”

There is widespread consensus that some UK vets are still sending out the wrong message to farmers – largely that persistently infected animals (PIs) should be kept on farms to build up immunity – and that is something that had to change quickly, agreed delegates.

In light of a recent Boehringer Ingelheim survey that showed vets were the source of BVD information for most farmers, Mr Hodgkinson said: “We need to make sure vets give farmers the right message.”

Peer pressure would be key to getting participation in the scheme, added Mr Westaway.

“You have to fight the wars you can win and the laggards will come last. We need to get to the stage [where the stigma of BVD] is like smoking in public. But it will take a while.”

But everyone agres that, ultimately, government intervention would be needed to build critical mass.

“We will have to get Defra to legislate to catch the laggards,” said Mr Westaway, a point echoed by German expert Klaus Doll.

The delegates said that legislation should focus on making it illegal to sell PIs and those from herds of unknown BVD status.

England and Wales must work together to co-ordinate BVD strategies or the ramifications could be devastating.

“It is a no-brainer. Commonality is exactly the same. There’s only one way to tackle BVD – together,” said Gavin Watkins, senior veterinary officer for the Welsh government.

“If we don’t work together I’m worried that Welshpool and Shrewsbury market could become a dumping ground for PI calves,” said Mr Hodgkinson.

Mr Watkins said to prevent PIs from being driven across borders it is essential legislation is made compulsory at the same time in England and Wales.

AHDB’s Derek Armstrong said aligning the databases to reduce burden is critical. “Farmers should only have to put tag numbers in once to access all UK databases.”

Part of this process should be to work with tag companies to ask questions and engage with BVD, stated Michael Seals. He queried whether it should be up to the tag manufacturers and retailers to ask “do you want a tag-and-test kit?” as a matter of course.

“The downside to having a high health status is your naive status goes through the roof.”

3. Why failure isn’t an option

The aim must be to get BVD down to levels whereby legislation is brought in by government, agreed delegates.

“This is the best industry collaboration for a long time. This is our chance to do something together and prove to Defra we can run ourselves without interference,” said Mr Westaway.

“If we can’t make it happen I don’t think we will ever be trusted in the future and if you can’t get rid of BVD, forget Johne’s,” he added, explaining that Johne’s was much more time-consuming and difficult to tackle.

If England and Wales fail to tackle BVD the impact on exports could be a huge.

“If we go three to four years and don’t get anywhere, exports of live cattle will be almost impossible [because we will be behind the rest of Europe] and we will have a hideously inefficient industry which isn’t fit for purpose,” added Mr Westaway.

Brexit makes it even more important for the UK cattle industry to emphasise its selling points, said Mr Dodds: “By the time we get this disease under control we will be out of Europe – and then we really are on our own.”

Mr Dodds added that calf exports to Germany and Holland have already suffered because of our TB status and the UK can not afford to let other infectious diseases take hold.

Ultimately, controlling BVD and other diseases is essential for profitability, said James Evans.

“As beef farmers we have the highest price in the world, yet some farmers are still not making money.

Hear from delegates at the roundtable about their experiences of BVD

An industry steering group is expected to launch a Wales-wide, voluntary programme this autumn to start in 2017.

Under current proposals blood tests would be carried out on a percentage of the herd to screen animals for BVD during annual TB tests on an opt-out only basis. It funded by the Rural Development Programme and supported by the Welsh government.

Gavin Watkins, senior veterinary officer for the Welsh government said: “The aim is to eradicate BVD completely from Wales. We want to work closely with the initiative in England.”

At the start of the month England launched a voluntary, industry-led BVD eradication scheme called BVD-Free.

The scheme requires beef and dairy farmers to sign up to a national BVD database where BVD statuses of animals are easily accessible. Any PI animals should be moved direct to slaughter.

Defra’s Animal Health and Welfare Board for England will be meeting in the next few weeks to discuss when is appropriate to make the scheme compulsory. Originally it was suggested that 90% of holdings should enrol 1,000 days before the government intervened but Michael Seals, board chairman, feels this is too high.

“If you get two-thirds voluntarily signed up that’s a really good way forward. But that’s something we will have to discuss in our group.”

Scotland, Ireland and Northern Ireland already have mandatory, government-led programmes under way and there is a genuine fear this is already cause trading disparities between countries.

What can we learn from Germany?

The German government launched a BVD eradication programme in January 2011 and it has successfully managed to reduce the prevalence of PIs from 23,793 animals to 1,718 over
four years.

However, mistakes have been made along the way and lessons learned, admits Klaus Doll, from the University of Giessen’s Veterinary Examination Office. He believes the UK can learn a lot from the German situation.

In Germany, the programme hinged on testing calves in the first six months of their lives by tagging and testing animals and removing PI animals from the herd.

However, farmers are allowed to retest calves a second time to identify any false-positives, as with any test there is a very small risk of getting a positive result from a negative calf. Retesting ensures only true positives are culled.

Although the disease declined sharply at the beginning of the control programme, it has still not reached 0% prevalence and Prof Doll admits a big reason for this was that Germany failed to recognise the role transient animals play in spreading the disease.

Transiently infected animals become infected with the virus but go on to make a full recovery and therefore test virus-negative, however, during infection they can spread the virus.

Type 2 BVD, a more severe strain of the virus, was also being spread from farm to farm by visitors, they noticed.

“Eighty-five percent of our farms are completely seronegative so if PI animals or transiently infected animals are introduced in these herds it causes a big problem,”
says Prof Doll.

For these reasons he believes vaccination should have played a bigger role from the start.

“In my opinion it would have been more cost-effective to start with vaccinating all breeding cattle for four years and then test the whole cattle population.”

In the past month, Germany has brought into effect regulations to help speed up BVD reduction:

Mr Lister first noticed there was a problem in early 2015. “We were having lots of fresh cow problems – retained cleansings, metritis, more mastitis than normal and a high rate of poor fertility.”

They were witnessing high numbers of stillbirths and calves with pneumonia and scours, he adds.

Although the herd had been vaccinating against BVD, Mr Lister admits they weren’t being thorough enough and the problems led them to investigate further.

They started BVD tag-and-testing calves and found 40 PIs in the herd over a six-month period. “We tagged stillborn calves as well and 90% of those came back as a PI.

Dams of PI calves were blood tested, and every result came back negative. However, all youngstock was management-button tagged and two PIs were later found in the yearlings.

Realising the scale of the problem, Mr Lister took the decision to vaccinate the whole herd and he believes this has been critical in controlling the virus.

They now vaccinate every animal on the farm over three months of age during their annual TB test and continue to tag and test calves after birth. Calves are not allowed to move from individual calf hutches to group pens until the results have been confirmed to limit virus transmission.

Mr Lister says this method of control has enabled the farm to get the virus under control relatively quickly – in just 10 and a half months – and they have found no PIs for 12 months, he adds.

“It has only cost us an extra £2 for the BVD tags and the vaccine is about £5 an animal. So for effectively £7 we have controlled the virus and removed the PIs. It is one of the cheapest things to control.”

Consequently, herd performance is excellent, although Mr Lister points out this is down to combination of improved health, dry cow management and nutrition.

Daily yields have risen from 25 litres to 32 litres, with annual yields peaking at 9,400 litres sold per cow per year, compared with a rolling average of 8,300 litres at the height of the disease outbreak.

Fertility has also seen an improvement. Conception rates fell to 28% during the outbreak but have now returned to 45%, with services per conception also lowering from 3.2 to 2.1.

“All the problems with calves just evaporated. The ones that needed to be injected or given electrolytes were inherently the PIs.”

Thanks to Boehringer Ingelheim and BVD Free, whose sponsorship made it possible to run this roundtable.