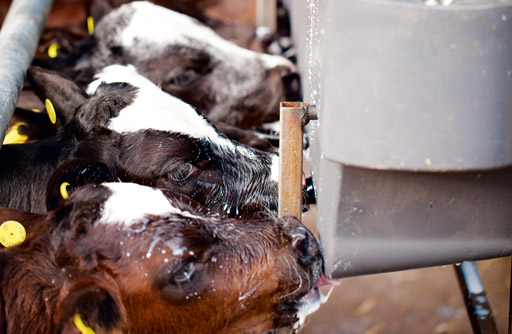 Heifer rearing has long been called “the forgotten enterprise” but things are changing.

The Cheshire Calf Project – based on the heifer rearing practices of 20 of the county’s dairy farmers – is seeking to create a blueprint for rearing that covers every stage from the baby calf through to calving.

Figures show more than 65% of all dairy heifers fail to calve by 24 months old. Based on the fact age at calving has a direct correlation with age at bulling, and inevitably fertility, it’s the development of the heifer through all stages up to bulling and even beyond, that influences this failure rate.

The length of time a heifer is on farm before it becomes a profitable part of the business, its widely varying feed requirements, management and housing all contribute to the unintentional “roller-coaster ride” young heifers often endure on many dairy farms.

And it’s the management “blips” that cause the checks in development thought most likely to result in poor fertility.

Maggie Gould of Volac, one of the partners in the Cheshire Calf Project, comments: “Improving heifer rearing practices is something many dairy farmers should focus on to achieve a high percentage of heifers calving at 24 months.

“It may be that heifers that are well-managed at every stage of their rearing will not only show the benefit by calving at 24-months, but also have a longer, healthier life once in the herd.”

The Cheshire Calf Project is a 15-month pilot programme that will deliver knowledge transfer to the 20 dairy farmers taking part and provide a blueprint for others.

Each has provided extensive data and weighings of a broad sample of the youngstock on their farms. It will be analysed to highlight any strengths and weaknesses and followed up with advice to counter potential management issues. There will also be farm walks and meetings to disseminate the findings to other dairy farmers.

All farmers involved will be sent a feedback report detailing why certain rearing issues have been identified, why they are important and what impact they will have on the farm’s profitability – as well as heifer longevity and health. Recommendations will be made to rectify problem areas in order to monitor any improvements that may result.

“There’s a wide range of systems on the 20 monitored farms, but there is no one single area of the rearing stage that can be categorically identified as the area that all farmers need to concentrate and improve on. All farms have their individual strengths and weaknesses when it comes to heifer rearing,” says Ms Gould.

“But if farmers want heifers to calve at 24 months old they must pay attention to weight gain in the first six months or heifers just won’t be big enough.”

Two producers involved in the project speak about what they hope to achieve from getting involved:

Rob Pierce, who runs 230 pedigree Holsteins at Pulford in Cheshire, was looking at ways of reducing the cost of rearing, while making improvements to the way they managed youngstock.

“We felt we were doing a good job but needed to take a step back and ask some questions about why we do certain things. You don’t always see your own weaknesses,” says Mr Pierce, who calves heifers down at 28 months.

Calves are in individual pens for the first four weeks of age and then run as pairs up to 12 weeks. They are fed a mix of waste milk and milk powder and weaned when big enough and eating 1kg of concentrates.

Calves are batched into groups of up to 10 at weaning and fed starter pellets and straw and then switched to a youngstock nut until bulling. At five months they are re-sorted and put into groups of 15-20 head and run in straw yards.

“We feed twice a day and by five months they get about 4kg of concentrates plus ad-lib barley straw. We used to feed a 17% ration but have now switched to a 20%.”

Suitability for bulling is assessed on size and age. “We don’t want heifers calving under 24 months so nothing is served under 15 months.”

Mr Pierce says it’s frustrating to have two calving heifers that have been together all the way through and yet one is 100kg heavier than the other.

“You have to ask why that happens. Are there some things we do that we don’t need to do, and things we ought to be doing? The project is making us focus on every part of the rearing system and ask questions.

“Heifer rearing can easily soak up a lot of money and time and yet it’s difficult to appraise what’s going on compared with the way you can keep a close check on how the cows are performing,” says Mr Pierce.

One recent innovation has been to give all calves a tag bearing their pedigree name. “It’s just a little thing we’ve started doing but it gives the animals an identity that a number fails to do. The staff who look after the youngstock have a greater awareness of individuals if they have a name as well as a number and that’s got to be good for management.”

A big improvement in calf health and growth has already been achieved at Hill Farm, Eccleston, Cheshire, where Adrian Jones has wasted no time in implementing changes highlighted in the early monitoring stages of the project.

Heifer calves from his 400-cow Codex herd are now receiving six litres of colostrum in the first six hours of life and are individually penned for the first two weeks. Previously colostrum intake levels weren’t as high and calves were reared on an automated feeder from day one.

“We’re now seeing calves at two weeks old, bigger than they used to be at six weeks,” says Mr Jones.

Keen to improve the overall performance of the business and reduce costs, his involvement in the calf project has also seen changes made to young heifer accommodation. Instead of being housed in various buildings the heifers are now run in groups of 40 up to bulling at about 13 months old. A silage pit has been converted into a straw yard and heifers are fed down a feed barrier. Dry feed intakes are 4kg a head a day.

“We were having issues in the post-weaning stage but now the calves are doing so much better. And we’re weaning at eight weeks instead of six. We have had some calving heifers that were probably a bit on the small side but the current heifer coming up to bulling look really tremendous.”

As part of the Farmers Weekly Stop the Loss Campaign in partnership with the National Youngstock Association, we have a host of advice, factsheets and videos on calf rearing on our dedicated page. Visit www.fwi.co.uk/stoptheloss