Instead some UK dairy farmers are following a trend seen on the continent for smaller, simpler, slurry-only units, designed mainly to meet a farm’s heat and electricity needs. 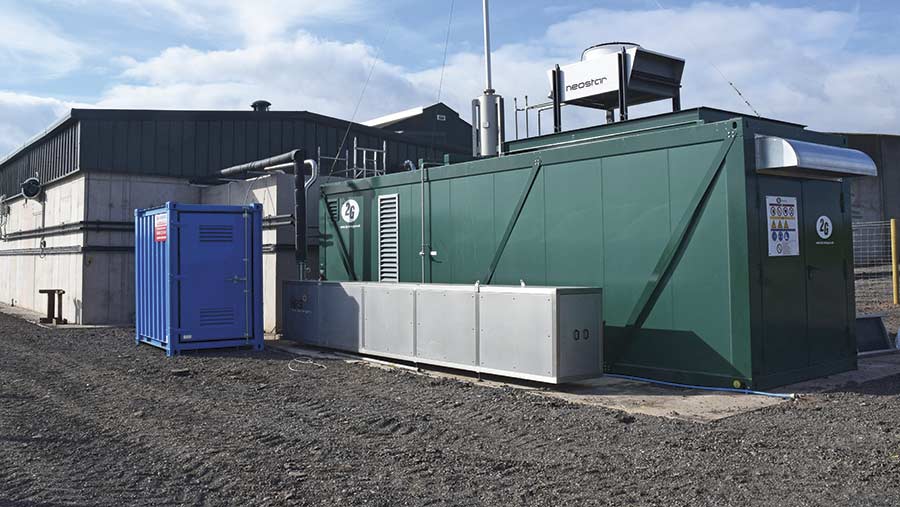 The UK has just 18 slurry-only AD plants running, but the number is rising and could soon double with 20-30 further units at the planning stage.

“The Feed-in Tariff (FiT) for electricity and the Renewable Heat Incentive (RHI) encouraged the rapid expansion of AD with more than 280 plants on farms,” says Dr Kaner.

These are mainly large and, as well as manure, need purpose-grown crops or other waste material to generate energy. Typically they produce 500kW per hour from a combined heat and power (CHP) generator, he says.

Few UK farms need more than 50kW per hour of electricity so these large plants were put in to capitalise on government payments by exporting the bulk of energy produced to the national grid.

Government consultations on the future of FiT and RHI suggest further cuts and the removal of incentives for energy from purpose-grown crops. The FiT will be discontinued for new plants commissioned after the end of Q1 2019.

“In large parts of the country capacity is no longer available or has become unaffordable. Timed and capped connections are also becoming the norm,” says Dr Kaner.

So large units dependent on energy crops are becoming harder to justify on single farms.

However, a slurry-only anaerobic digester uses just the manure and slurry available on the farm. Each tonne of organic dry matter in slurry can produce 300-400cu m of biogas.

A 300-cow unit can collect enough slurry to support a 50kW plant, avoiding the input cost of energy crops and better matching the electricity requirement of the farm.

The capital cost of a typical 50kW unit is about £400,000. It is still a significant investment but is a fraction of the multi-million pound bill for a larger plant.

Each livestock farmer should look carefully at the operational benefits, economic case and environmental impact of processing slurries and manures by slurry-only AD, Dr Kaner advises.

But slurry-only plants of smaller size could find a successful niche as a solution to a farm energy problem and provide other benefits, he adds.

Dairy farmer John Jamieson, who farms at Woodhead, near Annan in Dumfries and Galloway, has invested in a 50kW anaerobic digester designed to process 24t of fresh cow slurry a day.

Around 500kWh each day is used on the farm, reducing electricity purchases, and the balance is exported to the grid, for additional revenue.

Mr Jamieson plans to use surplus heat from the plant on the farm, securing further payments under the RHI.

Another benefit of the smaller-sized plant has been simplified planning and permits, says Mr Jamieson.

As it does not need additional crop or other material brought in, there is no requirement to qualify the farm as a consented waste management site.

“The lack of imported feedstocks avoids the need for truck movements on rural roads.

“And digestate from the plant can be spread on land without additional onerous restrictions,” he says.

Mr Jamieson applied for his FiT in September 2014 – before the government made swingeing cuts – and secured payments of 12.46p/kWh.

Combined with savings on his electricity bill and a provision for payments under the RHI, this offers him a payback estimated at 60 months.

After reviewing several options, he chose to finance the plant with support from the farm’s existing bank.

But a major consideration with a small plant is the operating cost, Mr Jamieson warns.

The CHP generator requires routine maintenance and periodic engine rebuilds. Over a 20-year lifetime, the operating costs of the plant as a whole will exceed the initial capital cost.

Construction of the SlurryGen-50 system supplied by Advanced Anaerobics Ltd started in July 2015 and initial commissioning followed in September. Severe storms in the area then extended a period of fine-tuning of the plant for optimum performance.

But it is now routinely producing in excess of 1,100kWh per day of electricity, against the theoretical maximum of 1,200kWh per day, he reports.

Alternative energy supply – AD can be a more cost-effective solution than bringing new 3-phase power to a farm where the nearest sub-station is some distance away.

Disease reduction – Passing slurry through a fermenter suppresses certain bacteria such as E Coli). This can reduce farm-based pathogen release into the environment and may benefit animal health and farm biosecurity.

Reduced fertiliser cost – Processing slurry by AD and spreading the resultant digestate can increase the proportion of nitrogen taken up by plants, reducing the proportion that is lost to the environment.

Cuts emissions – Capturing methane from slurry and using it to generate energy reduces emissions of this potent greenhouse gas.