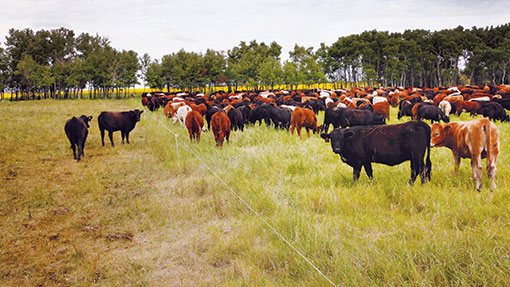 Moving a herd of 1,000 head of beef cattle eight to 10 times a day on to different grazing paddocks would appear to be an impractical and onerous system of management.

But this is precisely how Canadian beef producer Neil Dennis runs his business – and it’s proving to be a huge success in terms of improvements to soil structure, the availability of grass and the increase in beef output per acre.

While the scale of this operation in Saskatchewan may at first appear to be difficult to replicate in the UK, Mr Dennis is convinced the benefits he’s gained since switching to “mob grazing” five years ago, could easily be matched by UK beef producers, albeit on a smaller scale.

Having already visited the UK to talk about his grazing methods, Mr Dennis believes while his system is the most efficient way to use grass, the improvement to soil structure means there’s an increase in its ability to absorb rainfall more efficiently and minimise run-off – a feature that couldn’t be more timely following the UK’s current flooding.

Find out how mob grazing is working in the UK

The system is based on a “bed and breakfast” arrangement whereby Mr Dennis grazes the cattle for 100-120 days before the owner moves them into feedlots for finishing.

There are a wide range of breed types including both red and black Angus, some white-faced cattle and continental crosses.

“We just do this once a year, with the cattle arriving in late May to early June,” says Mr Dennis.

“We moved into this system because the conventional way of running beef cattle wasn’t profitable.

“We’ve adopted a holistic approach to our business which seeks to take some of the pressure out of the way the farm is run – and the rotational system of grazing was a part of that.

“When we tried it initially it didn’t work but we were making a fundamental error.

“We weren’t giving the land long enough to recover in-between grazings. Failing to leave enough recovery time and putting cattle back on the land caused damage to the root systems and insufficient re-growth.

“I found my root systems were restricted to the first two or three inches and weren’t deep enough.”

But when he corrected his errors and began to notice the benefits he was achieving by giving a longer recovery time, the advantages of the system soon became obvious.

“We used to allow three acres a head for summer grazing now we are less than one acre a head,” says Mr Dennis.

The cattle are moved to fresh pastures between eight to 10 times a day using a system of automatically controlled gates – powered by solar energy – and set on time switches. There is no panic or “stampede” when the 10ft gates are opened despite the number of cattle involved.

It takes 1,000 head of cattle about eight minutes to move through to the next paddock.

“It’s a system the cattle become used to and move quietly through from one paddock to another. I only see them each morning; the system is totally automatic apart from moving the single-strand electric fences.

“I spend less time now looking after cattle than I have ever done.

“It’s not a big job. Once the system is set-up there’s nothing to it. The cattle move themselves. I allow them an acre and then another acre every two hours.

“I spend no more than two hours every morning setting up the fences. Everything is temporary. One area is about 65ha but we do have an alley down the centre constructed of high-tensile fencing.

“In the UK it would be even easier to set-up because of the existing field boundaries which we don’t have.

“I can put up a quarter of a mile of fencing in 18 minutes. I use no fertiliser or sprays and my grass is growing taller and longer.

“Most of the time the cattle are only eating the top third of the grass but they are getting the best of it. This system is providing cattle with top-quality feed every two hours throughout the day.”

“Most of the time the cattle are only eating the top third of the grass but they are getting the best of it. This system is providing cattle with top-quality feed every two hours throughout the day.”
Neil Dennis, Canadian beef farmer

When Mr Dennis first started mob grazing the cattle were coming around to re-graze each paddock every 60 days. But experience has led to him doubling that length of time and it’s now about 120 days, which is producing a better quality of grass that isn’t heading, but is remaining in a vegetative state for longer.

“There’s nothing new about this system of grazing. The same principles were being used to graze cattle in the UK more than 100 years ago.

“The higher the stocking density the faster the re-growth of the grass.

“By leaving a longer recovery time and just allowing the cattle to graze the top is providing them with a much higher-quality feed. By improving the plant density it enables more carbon to be stored in the land and better water filtration. Root systems are so much more developed.

“We don’t get run-off when it rains. The rain soaks through because of the improved soil structure. When I’ve visited the UK and seen it rain it surprises me that the there is so much run-off. With a deep rooting system the rain would soak through. 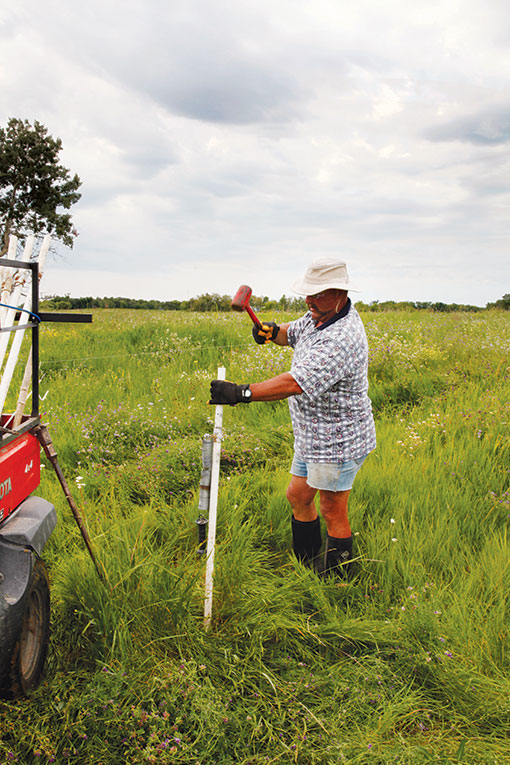 Neil Dennis says he can put up a quarter of a milk of fencing in 18 minutes.

The amount of grass left on each paddock varies. “Sometimes we take it down very short but the next time around we may only take it down to a third of what’s there. The secret is not to graze it in the same way every time.”

But Mr Dennis says he doesn’t get too concerned about how much grass is on each paddock once cattle are in the system. “If a paddock is short when they leave I give it a longer recovery time.

“This is all about recovery time – that’s fundamental to the system. Our ideal recovery time is no less than 60 days but can be as much as 120 days.”

Although the performance of the cattle is on a par with a conventional grazing system, Mr Dennis evaluates the success of rotational grazing on an acreage basis.

“And I can tell you I am producing more than twice as many pounds of beef per acre by mob grazing.

“The cattle are not selectively grazing and because they are shoulder to shoulder they are taking a rich variety of what’s in front of them. And that’s making the sward more diverse, more vigorous and ultimately more profitable.”