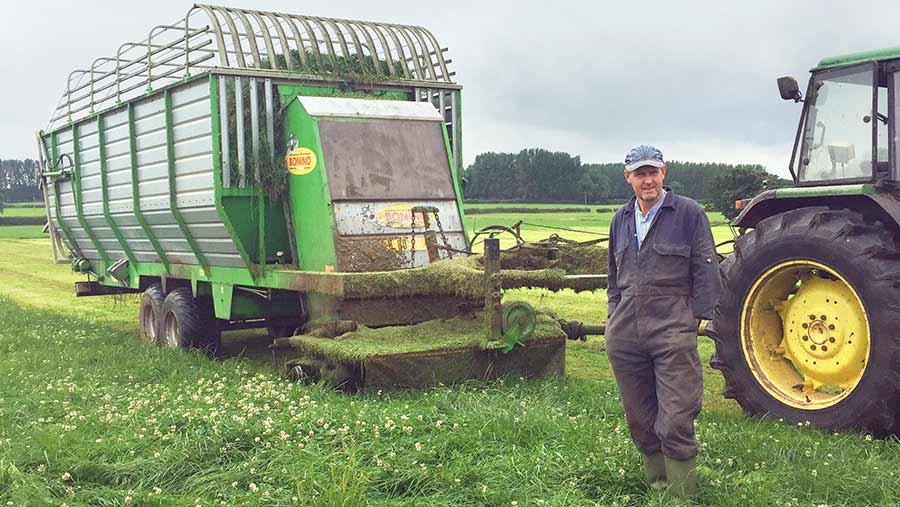 Zero-grazing may seem like a relatively new phenomenon to drive milk production from grass, but for Cheshire farmer Stuart Davies it is something he has been practising for the past 25 years.

Mr Davies and his father started zero-grazing cows in the 1980s after they visited a farm that was carting freshly cut grass to cows.

That herd was yielding an impressive 9,000-10,000 litres. So, after returning to the farm, they decided to give it ago.

They started by buying a double chopper, which cut grass and blew it into the trailer. They also reseeded two 6ha fields with Italian ryegrass.

Mr Davies says: “The farm we visited was getting better milk production from grass, and their grass was so much more productive. For us, we felt it could help extend the grazing season at either end of the year,” he says.

In the 1980s, Egerton Farm was home to 170 Holstein cows and 100 followers across 77ha. Traditionally, cows would be turned out on 1 April, but they soon realised when they started zero-grazing that cows would not eat fresh cut grass that recently had cattle grazing on it.

“We realised early on the cow dung tainted the grass and they wouldn’t eat it, so we started zero-grazing more.”

Mr Davies wanted to zero-graze to use grass better.

“The grass is so good in spring, as it is high in protein with not too much fibre.

“The problem is it grows so quick, you get wastage. zero-grazing helps control it as you can bring the freshly cut grass to the cows,” he says.

Mr Davies says if grass growth is not controlled in the spring, it will go to seed and will become more fibrous. However, by regularly cutting, the grass doesn’t go to seed.

“The idea is to have grass in September that is as good as spring grass,” he says.

Although the family has been zero-grazing since the 80s, the biggest revolution came 17 years ago when they purchased a specific machine designed for zero-grazing, called the Bonino.

By then, the cows were virtually always being zero-grazed, with restricted grazing during the day and lots of freshly cut grass offered after each milking.

“The machine was a two-drum mower, which fed grass into a trailer at the back. It cost £12,500 and revolutionised zero-grazing for us,” he says.

Since investing in the machine, they have been cutting grass twice a day and now have a newer version of the machine.

Cows are now housed until mid-July and turned out when the grass growth slows. Mr Davies says: “In July, grass growth slows, so we can control it better. We can zero-graze a bigger acreage in a shorter period of time.”

Each cow receives 70kgs of grass a day and 5kg of corn out of parlour feeders and another 2kg of corn (4kg/day), which is added on top of the grass following the morning and afternoon milking. They also have access to haylage in the cubicles.

After milking, cows are let into the cubicles for an extended period to eat and ruminate, before being let back out to grass. Cows always have grass in front of them when inside. “We give them more than they can eat,” says Mr Davies.

It’s about making sure you plan your blocks, have the right equipment so the grass isn’t damaged, cut at the right time and also having the right cows.

About 0.8ha of grass is cut a day. Mr Davies aims to cut it when grass is about six inches tall. It takes about an hour a day to cut, and feed in the passage.

Ideally, grass should be cut when it is dry, so Mr Davies plans cutting times each day around the weather, cutting once in the morning and again in the afternoon.

Fields are cut in blocks with about four to five weeks left between mowing. After a block is cut, slurry is then injected into the soil using an umbilical system.

Grass is also tested every two weeks, so diets can be adjusted according to nutrient levels in the grass.

The sugar content was average at 9.8% and crude protein 16%.

“The idea is to get a really thick matt of grass. The grass coming out the machine shouldn’t look any different to how it looks in the field. As soon as you start getting knocks and kinks in the grass, it will heat up and the cows won’t eat.”

Grass varieties are important to getting good growth and quality throughout the year. Mr Davies uses later-heading perennial ryegrass.

The leys also contain a high clover content. He doesn’t do a lot of reseeding as he says zero-grazing has helped prolong his leys. “The aim is to cut all leaf rather than stalk,” he adds.

zero-grazing isn’t about cutting costs, says Mr Davies. He says it’s about producing more from what you have got.

“We buy in a lot of corn and produce more grass than we used to. We are producing 25-30t an acre,” he says.

Despite cow numbers reducing to 130 cows plus 80 followers due to NVZ regulations and the breed changing from Holstein to a three-way cross, the farm is only producing fractionally less milk than it was when they had more cows and weren’t zero-grazing. 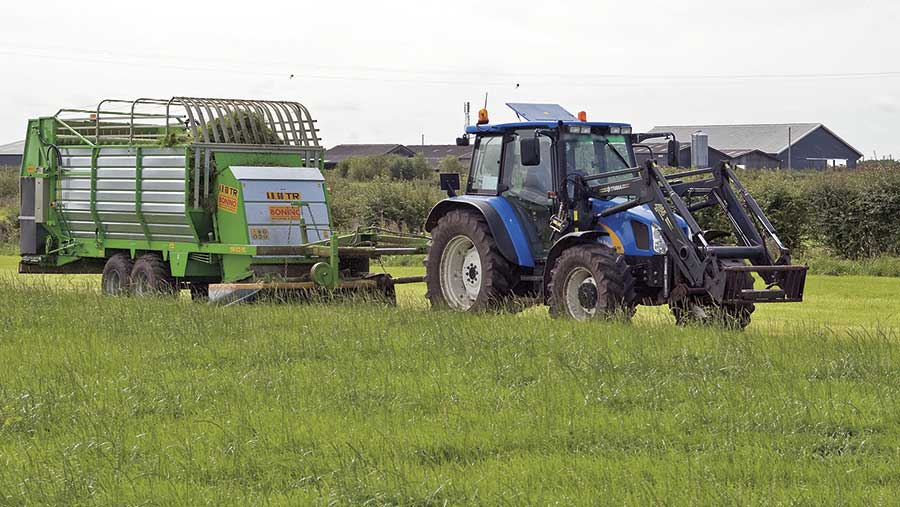 Cows are yielding 33-34 litres during the summer and average 31 litres year round.  Average feed cost per litre stands at 7.1p, with 4,300 litres out of a total of 9,935 litres of milk a cow produced from forage.

“I don’t tend to calculate success on how many litres I am producing from forage,” says Mr Davies. “My aim is to achieve an output of £2,000/acre, whether that is from milk, calves I sell, cows, silage etc.”

Mr Davies says his fuel cost is kept relatively low. “I use a 40-litres tank of juice every five days, so it’s not costing too much,” he says.

Mr Davies says zero-grazing isn’t for everyone as grass needs to be cut twice a day for most of the year. He also says it’s not just a case of cutting a field of grass and expecting cows to perform off it.

“It’s about making sure you plan your blocks, have the right equipment so the grass isn’t damaged, cut at the right time and also having the right cows. The cross-breeds are used to having big bellies of grass. The Holsteins didn’t seem to use it quite as well,” he adds.