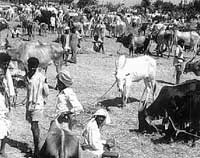 Scientists have announced that they expect to be able to announce the worldwide eradication of the cattle disease rinderpest during the next 18 months.

The UN’s Food and Agriculture Organisation says it will be the first time in history that humankind has succeeded in killing off an animal disease.

The disease has not been seen in Europe since the early 1900s, but rinderpest remained a serious problem in sub-Saharan Africa and southern Asia until the late 1990s.

The last recorded outbreak of rinderpest was in Kenya in 2001.

The disease is suspected as having played a role in the decline and collapse of the Roman Empire and recurring epidemics in France during the 1700s provoked famine and drops in agricultural productivity.

When rinderpest was introduced into sub-Saharan Africa at the end of the 19th century it killed off 80-90% of all cattle in the region.

The disease has been conquered using a vaccine and a programme of education implemented by the FAO.

You can view a map of how the disease has retreated here and a timeline of its spread and eradication here.