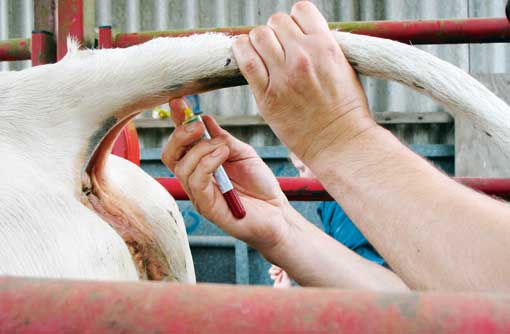 It’s a common misconception that vaccination eliminates the risk of Bovine Viral Diarrhoea. Rather, it should be managed as part of a systematic control programme.

Autumn block-calving herds should check their BVD status pre-mating, and take appropriate measures to prevent new Persistently Infected (PI) calves from being among next year’s crop of heifer replacements.

DairyCo vet Elizabeth Berry explains the biggest problem for a block-calving herd is all cows are at the same stage of pregnancy at the same time.

“Hence, there is a greater risk of high numbers of PI calves being created in the uterus if the cows are exposed to the BVD virus in the first 120 days of pregnancy,” she says.

“Foetuses are particularly susceptible at this stage as their immune system is not fully developed. There’s no research data to confirm how many PI calves will be born out of a batch of infected cows – it could be just one, or all of them – but it will have a huge knock-on impact as a PI calf will spread virus for the rest of its life.”

Up to 10 million viral units a day can be shed by just one PI animal. Yet these animals are not easy to spot because they may not show any physical signs and can carry on calving and milking normally in the herd.

“Heifers reared with a PI animal among them will take longer to achieve bulling weights and have more scours and pneumonia. All these factors will combine to delay age at first calving,” says Dr Berry.

BVD control is equally important in protecting the calving pattern because infection not only leads to immediate effects such as reduced conception, foetal death and the birth of PI calves, but also long-term health problems.

And while infection after the first 120 days’ gestation is less likely to produce PI calves, more severe outcomes such as abortion or calf abnormalities can be seen.

Using sweeper bulls for the tail end of mating is another risk factor, says Dr Berry. “It could have virus in its semen – or spread the virus to cows already in those vulnerable first 120 days of pregnancy through simple direct contact. Either buy from a BVD-free herd and ask a lot of questions about its status, blood test him and vaccinate on arrival, or breed your own,” she suggests.

Biosecurity is equally important where herds send dry cows off farm, or heifers are contract reared away to expand the milking platform.

Vaccination can help control the virus. Given at the right time, pre-mating, it protects a pregnancy and prevents PI calves being born, yet Dr Berry stresses it isn’t foolproof. “It only damps down the infection level and helps reduce losses, not eliminate them.

“This is why it must be part of a systematic plan. Every herd should draw up a BVD control plan with their vet which includes monitoring through testing bulk milk and blood samples, culling PI animals and operating high standards of biosecurity to prevent re-infection.”

Cows with BVD are also more susceptible to other diseases, such as IBR and Johne’s, because BVD affects their immune system. This is why such herds often record higher levels of lameness or more cases of mastitis.

Losses due to initial infection are obvious and expensive, but she points out that with around 90% of British dairy herds having been exposed to BVD, it’s these hidden losses from long-term infection which become an annual drain on farm finances.

“Although most people are aware of BVD there is still confusion about the facts and some think vaccinating means they are disease-free. But they won’t be if they haven’t culled their PIs, plus there are different types of vaccine on the market with different administration routes and programmes. Testing can be confusing too. That’s why it’s important to consult your vet to identify a herd’s BVD status and work out what to do if the herd is free and what action to take if infected.”

The Cattle Health and Welfare Group (CHAWG) identified BVD control as a priority for the English cattle industry; in Scotland, there is an eradication scheme in place.

DairyCo is managing the delivery of a BVD awareness campaign, funded by the Regional Development Programme for England, that will run to March 2014.

An industry BVD stakeholders’ group has been established under the chairmanship of farmer Bill Mellor, with the long-term aim to develop strategies to control and eventually eradicate BVD from the national herd.