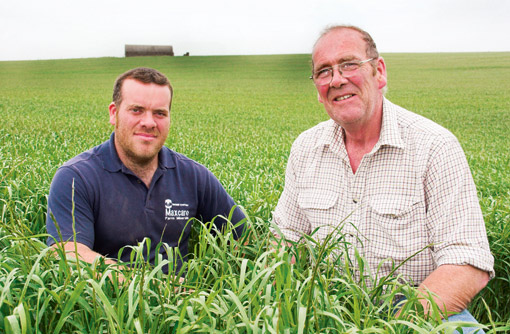 An autumn flush of red clover has contributed to higher than average daily liveweight gains in lambs at Dinas Island Farm.

Much-needed rain from the beginning of September stimulated exceptional growth in the red clover leys.

Neil Perkins would expect to achieve growth rates of between 200g and 250g a day in autumn but this year lambs have been averaging 350g.

“The grass-based, lamb finishing system at Dinas Island relies on all the lambs being sold by Christmas to avoid feeding concentrates,” he says. “This summer, with the dry weather, lamb sales have been a bit slower. Weights are generally down by around 1.5kg a head.”

Consistent rainfall since 1 September has accelerated growth, much to Neil’s relief. “It is nice to see the Island green again,” he says. “All the pastures are having a growth surge which has put the lambs’ weights and sales back on track.”

Improvement in pasture production has coincided well with tupping. The first group of 900 ewes, the Lleyns, were put to the ram on 4 October. Two weeks later the second batch of 650 commercial ewes went to the tup. Both groups will be lambed indoors.

The third group to be tupped will be 450 ewe lambs, on 1 November. They will be weighed and will need to be 65% of their mature weight – around 37kg – to be included in the group. Anything that falls below that will be sold as fat lambs or, if they are close to the target weight, will be wintered on cliff land at Dinas Island.

“These ewe lambs will be our replacements so we do not want to lamb them too small or they will not recover for the following year,” Neil explains.

“Also, if they are not at this weight by this time of the year, they will be unlikely to produce fast growing lambs themselves so are undesirable as replacements.” This group will be lambed outdoors.

After the first few weeks of tupping, chaser rams with markers on will be put with the adult ewes and any ewes that are going to lamb later will lamb outdoors with the ewe lambs. The condition of the ewes has been exceptional.

“They have almost bordered on being in too good a condition. Perhaps it was because we had an early spring and they weren’t having to milk off their backs.”

Condition scores influenced the tupping groups. Those with a higher score were kept off lush grass, which was reserved for the thinner ewes. “We try not to put the Lleyns on lush grass because we don’t want too many triplets,” says Neil.

To date, 880 lambs have been sold and the latest batch of 264, with an average weight of 18.5kg, were sold at £3.65/kg deadweight after transport and other costs.

This was 30p/kg up on last year’s price. It is hoped that the rest of the lambs will be sold in batches of around 150 every fortnight, with all the lambs being sold before Christmas.

“This is almost on a par with a reasonable cake. It means we will not have to feed a supplement,” says Neil.

“We were able to cut early, in May and June, because of the good spring. With the continued efficiency of our silage contractors, Peter Marks and his son, I had a feeling as I was looking at the crops coming off that they would hopefully be of good quality.”

“We always try to focus on making silage of the highest possible value. The difference between feeding 1kg and 1.5kg of cake to 200 cattle is 10p a head extra which spread across 180 days is £3,600.”

All the silage is made into big bales and Neil selects the best crop for the sheep because their dietary needs are more complex than the cattle which he contract rears. The sheep silage shows a dry matter of 44.9%, 14.2% protein and an ME of 11.1%.

“This batch is slightly more mature and drier than the rest and this is good for the sheep because from experience we know that if we feed leafier, wetter silage we can get prolapses and also bedding is wetter which causes foot problems.”

Tack land has been taken on to rest the clover leys and to avoid the need for applying an autumn dressing of fertiliser. “The land is so highly stocked with sheep for the whole season that if we can rest the fields for three months it can only be a good thing.”

The tack land will be used to graze 450 ewes and 500 ewe lambs and the remainder of the flock will be grazed on coastal land and environmental grasses. The tack, which Neil rents from a neighbour and also from the dairy farmer he contract rears calves for, is only four miles away and the sheep will be returned six weeks before lambing to avoid any health problems.

The first of the autumn-born calves arrived on 1 September after the last of the 2010 autumn batch had left the farm. They had achieved an average weight of 270kg at 12 months, which is Neil’s target for Friesian-crosses.

The spring-born heifers were housed on 3 October to preserve pasture for the sheep.

Housed heifers are fed a blend of round bale silage with concentrates as needed.

“We aim to keep the sheep out as long as possible,” Neil says. “When we discussed our system with our consultant we agreed that from a grass management point of view the sheep had to be our primary focus.”

Following the success of using Italian ryegrass as part of the rotation a further area of almost 10ha has replaced a medium-term ley. It delivered a bulk crop of quality silage. Instead of ploughing last year’s field of Italian ryegrass it was sprayed off and cultivated using disks as a min-till system.

This approach saved Neil £49/ha in ploughing costs. “We would obviously have cultivated the land had we ploughed it so by using min-till we have saved on the ploughing cost and the soil has kept a fairly firm surface structure. We might be able to graze it with ewes at the back end of the season.”

The farm is within the Tir Gofal environmental scheme and the Perkins have decided to continue their agreement for the remaining two years, rather than transferring to Glastir, which replaces all other existing schemes.

When the Tir Gofal agreement expires they are doubtful that they will join Glastir, preferring to be free to make their own environmental improvements. “I feel that I know the land and how it benefits wildlife and would prefer to make our own decisions rather than be tied to a set of prescriptive rules,” says Neil.

Glastir was one of the topics discussed with Wales’ deputy farming minister, Alun Davies, when he visited the farm last month.

As chairman of Future Farmers of Wales, Neil was asked to host a visit to discuss topics close to the hearts of young farmers.

At the top of the agenda was CAP reform and the impact it would have on the new generation of farmers. “We were given the impression by the minister that he was very keen to take our views on board but that he expected farmers to modernise their way of thinking when it came to marketing routes,” says Neil.

While it has been a good year for lamb prices at Dinas Island, it hasn’t been such a buoyant one for the family-run holiday business.

In past seasons there were several two-week bookings for their holiday cottages but there have been fewer this year. There have been some voids too.

“We have really noticed how the recession is making people cut back,” says Neil. “We supply meals, bread, cakes and puddings for the visitors if they request them and although they have still been buying the meals they have been cutting back on the treats.”