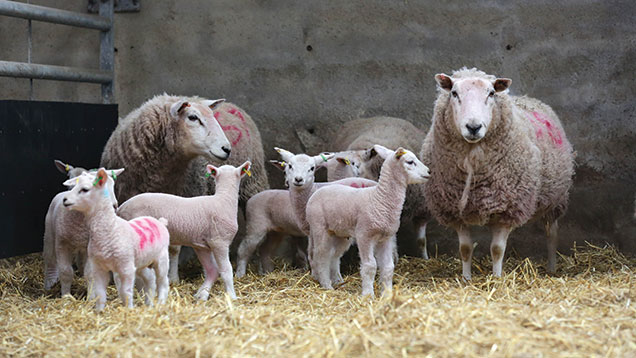 Farmers should be working closely with their vets and introducing a planned approach to deal with sub-clinical coccidiosis, in order to avoid the hidden costs of the disease.

While coccidiosis is well-recognised by farmers once the lamb shows overt symptoms such as scours, the early sub-clinical stage is much harder to detect, yet has significant implications for daily liveweight gain and profitability.

“Farmers need to build a complete picture of the disease risk on their farms,” says Fiona Lovatt, independent sheep consultant.

Coccidiosis is being diagnosed increasingly in both young lambs and calves, and can have a serious impact on production.

Research confirms that growth setbacks at an early stage will have long-term effects, and can lead to significant financial losses, as the lost growth cannot be regained.

“Farmers generally have a good idea of when, and in what pastures on the farm, they may get a problem.

And the majority of vets will be able to test faecal samples to distinguish whether the problem is coccidiosis, a heavy worm burden, or both,” says Dr Lovatt.

But that’s not the whole story, she says. “Testing faecal samples for the specific coccidiosis species, known as speciation, can help to pinpoint the need to treat and the right time to do it.”

The two most significant species of disease causing coccidiosis in sheep are Eimeria ovinoidalis and Eimeria crandallis.

“Depending on the species, the number of days between a lamb ingesting an infectious coccidial oocyst [egg], and them showing clinical signs, varies.

“By testing and knowing which species of coccidiosis is most prevalent on your farm, it’s possible to have a more accurate idea of when to treat lambs to avoid widespread production losses.”

She advises that for accurate speciation testing results, farmers work with their vet and send samples from at least 12-15 lambs at between four-to-12 weeks of age, which is the highest risk period.

“Severe disease is generally seen in naïve lambs, when they’re suddenly exposed to a large number of infectious coccidial oocysts.

“This can be due to faeces in food or water, dirty conditions, overstocking, or when younger lambs are turned out on pasture where older lambs have previously grazed.”

“Ideally lambs should be treated before clinical symptoms are seen, but after they’ve been exposed to coccidiosis to allow a level of natural immunity to develop.

“Once you start to see lambs with clinical signs, it’s safe to say that most of the rest of the group will be infected and the whole group should be treated immediately.”

Over the past two years Bayer Animal Health has been working with vets supporting the collection of on-farm samples that have been sent to SAC laboratories for coccidiosis speciation.

From 247 tests, only 22 came back negative for coccidiosis with the vast majority – 86% – recording positive results.

“Timing is critical when managing coccidiosis, and it’s essential that, to stay ahead, producers take a whole-farm approach,” says Dr Lovatt.

Group treatment in the face of an outbreak
When some lambs are showing clinical signs, most of the rest of the group will be infected to some degree.

As soon as coccidiosis is diagnosed in a single lamb in a group, either diclazuril or toltrazuril should be given to all lambs over three-weeks-old in that group. It may be necessary to repeat the diclazuril dose after three weeks.

Group treatment in the face of expected high-coccidia challenge
When no lambs are showing clinical disease, but history and screening have indicated the lambs will be exposed to a high level of oocysts then there are several treatment options.

Diclazuril has no residual activity so the timing of treatment is critical and it is rarely appropriate to be used on the day of turn-out. When susceptible lambs are moved on to contaminated land, the product should be given 10-14 days later and it may be necessary to give a second dose three weeks after the first.

Toltrazuril has a longer duration of action so one dose is all that is necessary. Timing is less critical but the ideal timing of treatment has been shown to be a week after turn-out on to contaminated land or a week before expected clinical disease.

Decoquinate can be mixed into the lamb creep over the period of risk at a rate of 1mg decoquinate for every kilogram bodyweight a day for at least 28 days. Each 10kg lamb must ingest 100g of creep a day to maintain adequate decoquinate levels.