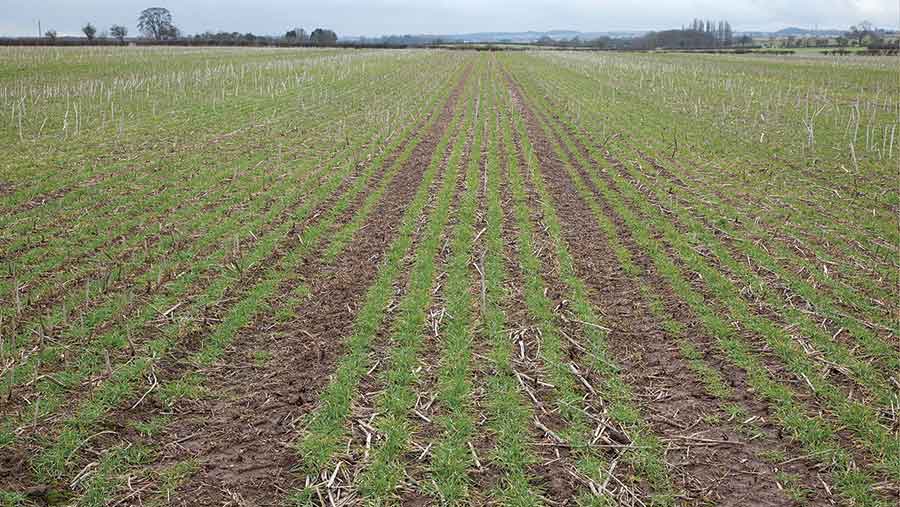 Controlled traffic farming also has a role to play in establishing other crops, such as wheat. © Jonathan Page

Controlled traffic farming (CTF) in silage fields – similar to setting tramlines in arable systems – is being shown to halve the area covered by tractor tyres and lead to a subsequent improvement in grass yields, according to a study by the AHDB.

The AHDB Dairy study has been prompted by previous research highlighting a 24% reduction in soil compaction caused by tractor tyres in first-cut yields.

With an estimated 85% of the area of a field covered every year by tractor tyres, the potential impact of compaction from machinery can be significant.

The CTF research project, carried out at SRUC in Dumfries, has been mapping traffic movements under a CTF and a traditional traffic pattern, comparing soil structure and grass yields.

Over the first season, grass yields were 0.9t DM/ha higher in areas where traffic movements were controlled.

What is controlled traffic farming?

Dr McConnell says real-time kinematic (RTK) positioning is likely to be the best way to control traffic movement because grass will grow over tramlines established during fertiliser application.

“Controlled traffic farming is certainly a strategy we should investigate further. The first year’s data would suggest there it is a positive impact on soil structure,” she says.

Dr McConnell admits that a true controlled traffic system with GPS guidance may not be suitable for some farms due to cost and the size and shape of fields but says the principles of confining tractor movement can be implemented in most fields.

“This can be done by introducing laneways in fields, having a good network of gates and infrastructure, and making machinery drivers aware of where the greatest potential risks of soil damage are. Very basic tramlines or laneways could even be implemented by placing markers around the boundary of the field,” she suggests.

The research trial will now investigate whether CTF is beneficial to fuel consumption and work rate.

Joe Dugdale runs a 400-cow autumn block calving herd on a grazing- and forage-based system at Crathorne Farms, near Yarm. He sells his milk to cheesemaker Wensleydale Creamery, so aims to maximise milk solids production from forage.

He recently introduced CTF in his 600ha arable enterprise and is keen to extend this to his grassland system. “Our soils have a high clay content and are prone to compaction, so we believe controlled traffic could be beneficial,” says Mr Dugdale.

With four cuts of silage produced annually, he decided to trial this approach on a 17ha, newly established perennial ryegrass silage ley.

“There is data that shows that grassland suffers from compaction more than any other agricultural crop, but we are happy to drive all over our fields,” he says.

Mr Dugdale’s contractors use RTK and GPS technology on their tractors and set the RTK to the same guide line installed on each tractor to allow all silage operations to follow the same tractor wheelings.

In the controlled traffic area, mowing, tedding, raking and lifting operations were all completed on a 9m working width. Tractors with trailers were also restricted to travelling on an adjacent tramline 9m away.

“Mowing, tedding, raking and lifting were all on the same wheelings. When harvesting, the carting tractors tried to follow the adjacent wheelings, but in windy conditions this was too far to throw the grass so one tractor wheel of the carting tractor fell on the tramline and one was slightly closer to the harvester,” Dr McConnell explains.

The results showed the area trafficked reduced from 57% to 23%, but there were no notable differences in yield.

“The two fields that were used were adjacent, reseeded at the same time with the same varieties and managed similarly.

“However, one had a slightly more patchy establishment compared with the other, which meant differences in yield from the start of the year, which unfortunately makes it difficult to establish the true effect of the CTF,” says Dr McConnell.

Despite this, Mr Dugdale is keen to roll out CTF across his grassland system. “We neglect our grassland but we really ought to be more focused on measuring and managing it,” he says.

Mr Dugdale believes CTF is more suited to some systems than others. “I can see big benefits if you house your cows for 365 days of the year and are producing a lot of silage from short-term leys in an arable rotation. The size and shape of a field are important too; a big, rectangular field is the ideal.

“RTK is far more accurate than the trained eye, which means machinery can be used to its full potential; if a machine is 9m wide, it means you will use the full nine metres.”