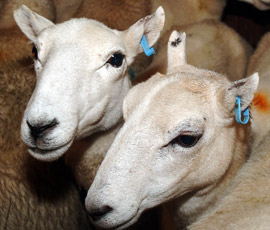 Rules governing the electronic identification of sheep could be challenged in the European Court of Justice.

Farmers have been struggling to comply with the rules, which require the individual tagging of sheep, since their introduction at the start of 2010.

Now though, German sheep farmers have been granted the opportunity to mount a legal challenge, after a court in Germany decided they had a strong enough case to take their fight to the highest level in European justice.

The case, brought by the German Association of Sheep Farmers, centres on the expense of implementing the procedures for what it termed – “questionable results due to the unreliable nature of the tag readers”.

The association has also provided evidence on animal welfare grounds which showed the increased level of injury to animals brought about by the extra tagging.

The move has been welcomed by NFU Scotland which has also been compiling evidence for a possible a legal battle.

“The Stuttgart court considered that the German shepherds’ case regarding requirements for individual and electronic identification of sheep and flock record-keeping was difficult for the EU to justify.

“That development is both interesting and beneficial. The UK has been seeking allies in other Member States to drive for a fundamental review of [tagging rule] regulation 21/2004.

“This action, coupled with growing support from other farming unions within the EU farmer body COPA, will help strengthen the case and raise awareness of the difficulties that many farmers across Europe are having in complying with the rules.”

Liberal Democrat MEP for Scotland, George Lyon also welcomed the court’s decision.
“This court case has the potential to throw a spanner in the works of the controversial EID system.

“If the action of the German Sheep Association goes all the way then it could force the Commission into a complete rethink over its plans.

“This is a new window of hope for Scottish farmers who have long known that the system is unworkable and needs to be changed.

“We must keep a close eye on the court case as it develops and be ready to supplement the evidence with the experiences of Scottish sheep farmers.”

Join the conversation on the EID system on our forums