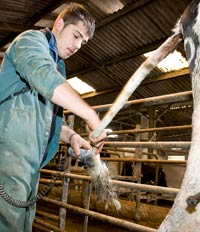 “Some farmers have trimmed more than 700 cows’ tails in a rotary in a single milking, compared with up to five days using hand tools.”

The trimmer is both cow and user friendly, eliminating the likelihood of cuts and grazes to the cow and staff.

“With the increasing size of parlours in the UK, it has never been more important to have cows’ tails trimmed to maintain good dairy hygiene and operator health,” he says.

“The cylindrical cutting operation is unique, cutting a cow’s tail hair close to the tail, without risk of damage.”

The user attaches the trimmer to a cordless power drill and feeds the tail in, while holding the tip of the tail. The trimmer is then run as high up the tail as desired.

“It has been proven through extensive trials, to work in all conditions, over and over again, even on the most daggy tails.”

A video of the Shoof Power Tail Trimmer in action can be viewed at www.kiwikit.co.uk. The trimmer will also be demonstrated at the Royal Welsh Show.