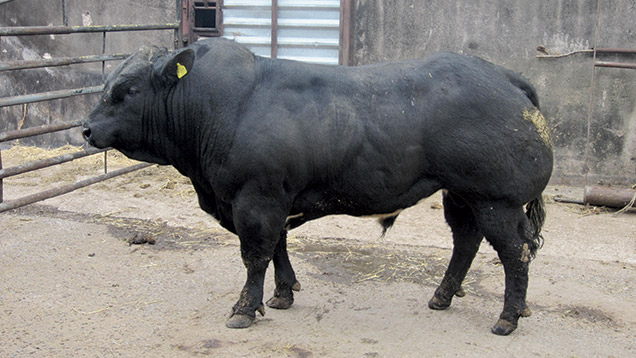 The benefits of hybrid vigour have long been exploited across all livestock systems, particularly for valuable traits such as fitness and fertility.

This has been predominantly through the female, but some suckled-calf producers, and even dairy farmers, are becoming firm supporters of using cross-bred bulls for breeding.

And for Cumbria farmer Brian Hall, the breeding and sale of cross-bred bulls has now become an important part of his business.

Over the past 15 years he’s established a keen following for British Blue cross Limousin bulls and now runs 200 pure-bred Limousin cows at Ainstable, near Penrith.

“Before foot-and-mouth we were producing some cross-bred British Blue cross Limousin bulls for breeding. When we restocked we set up a herd of pure-bred Limousins and continued to use the British Blue.

And he admits that it’s his reputation for demanding good shape in all his cattle that continues to drive his interest in producing cross-bred bulls.

“Everyone knows I like cattle with a big end and that’s what I want to produce in the cross-bred bulls. We’re aiming to breed them better and better all the time.”

Even before foot-and-mouth hit Cumbria, Mr Hall had recognised the growing interest in cross-bred bulls for breeding and over the years he’s seen the demand increase.

“The market has just grown and grown. We used to breed some pure Limousin bulls, but when buyers saw the cross-breds they always ended up going home with one of those instead.”

The success of the cross-breeding programme hinges on using top-quality British Blue bulls.

“We want good shape, plenty of width, a big end and a bull that’s good on his legs and can walk,” says Mr Hall, who has recently had two crops of calves sired by a bull imported from Belgium.

“Cross-bred bulls are giving buyers a sire that has the best of both worlds and draws on the qualities of both breeds and has plenty of shape. I used to think that the benefits of hybrid vigour were overrated, but now I know just how much influence it has.

“We went for six years and never had a bull back and last year we sold 37 bulls off the farm. They just get on and do the job.”

All bull calves from the spring and summer calving herd are kept entire – although only the best will be taken through and reared as potential breeding bulls. The best six bulls are snapped up each year by buyers wanting to breed calves for primestock showing.

Apart from the late summer-born calves, the rest stay out with their dams through the first winter and are weaned at seven to eight months old and housed in February or March.

“They are far better outside,” says Mr Hall.

Once weaned, the bulls stay inside and are on ad-lib hoppers until about a year old.

“After that they come off the hoppers. We used to carry on with that level of feeding, but while they do look better for it, they aren’t better for those that will be buying them as working bulls.

“We prefer to sell bulls at about 18 months old. They don’t show their full potential until then.”

“We put them on to Limousin cows because they give us just the right amount of British Blue breeding that we need. The cross-bred bulls tend to make the calves look like Limousins but they have extra shape.

“And we keep our own heifers for breeding so the females sired by the cross-bred bulls have just enough British Blue breeding in them so that we can put them back to the Limousin and have females that aren’t too muscly to affect the calving,” says Mr Munro.

Locomotion and hardiness are two qualities he recognises in the cross-bred bulls he uses.

“A lot of our cattle are out-wintered on the hill and these bulls cope really well and stay very mobile.”

This year has seen show calves bred by Mr Munro, sold for £2,800 and £2,300, achieve success on the summer show circuit.