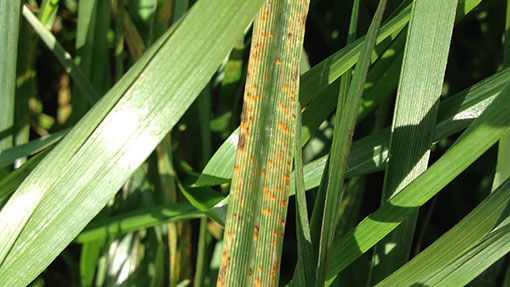 Forward silage areas are at increased risk from yield-sapping crown rust this spring with early reports of the disease affecting silage areas as far north as North Yorkshire.

Crown rust is a disease caused by the fungus puccinia coronata and can prove costly to farmers, with severe attacks reducing grass yields by as much as 25%.

However, while the warm weather means some Italian ryegrass and Westerwolds silage crops may be ready for cutting three weeks ahead of schedule, it also raises the threat from this pathogen.

“But most of the fields I walked at the end of last week across the Midlands had significant infestations on the lower leaves. Severe attacks can reduce grass yields by as much as 25% and are no longer restricted to the south of England. Cases have been reported in North Yorkshire and beyond.”

Too late to spray

Affected crops can be sprayed with a propiconozole fungicide, but on rotational grassland, it requires a 28-day interval from application to harvest. So it may be too late to spray the most forward crops.

“The only answer for some fields will be to harvest the crop as soon as conditions allow, and use an additive to restrict the growth of moulds on the conserved material,” suggests Mr Bonshor.

“Farmers should leave a longish stubble – around 10cm, which will allow the grass to return to vegetative growth as quickly as possible, and apply nitrogen fertiliser promptly. This should resolve the disease issue in the subsequent crop. However, new growth should be checked to spot any signs of reinfestation.”