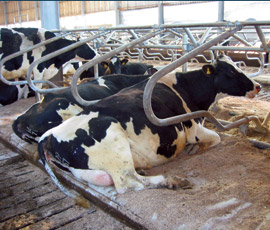 The vast majority of the nation’s dairy cows are now housed in cubicles, a space-saving system which allows more animals to be housed in a given area than if they were in loose yards.

But there is more to cubicles than merely parking cows in ordered lines – a whole science has grown up around their construction, their design and their dimensions.

A bit of history

Over the years, as cows have become larger and more thought given to their welfare, cubicle design has changed significantly.

It is difficult to pin down the actual year when cubicles were first used (or even who invented them) but there were certainly cubicles of a sort being used in the 1950s.

Training herds to take up residence in cubicles was also something of a challenge.

Owners who had invested heavily in such systems were somewhat disheartened when they found their cows preferred to bed down in the feed passageways.

The solution was often to fill every other available space with old tyres and machinery so the only place left to go was the cubicles.

Some of the early cubicle development work was carried out by colleges and the Newton Rigg cubicle was popular with quite a few dairy farmers. But like other designs of this time, the front and rear anchor points restricted hind leg movement – and sometimes caused actual injury.

Cubicle designs with names like Auchincruive, Cross rail, Cantilever and Dutch Comfort claimed to offer new features and advantages for the cows which lay down within them.

In the mid-1990s the mushroom cubicle was anchored to the base only towards the front of the cubicle and left the rear as an open space and free for wayward legs and udders to safely stray.

These were the first cubicles which really attempted to provide a design which best suited the cow’s needs rather than being simply a place for the cows to be.

It was also becoming clear that cows needed to be comfortable if they were to spend any length of time in their cubicles and not simply mooch about wasting energy.

The 1.1m high neck rail, which spans the two side tubes, is critical to allow the cow sufficient room when she gets to her feet.

Why space is key

Given enough space, a cow naturally gets on her hind feet first and then on her front feet. So it was important to allow enough height to allow the cow to rise without her head or neck being restricted by this rail.

But the cow also moves forward, or lunges, as she gets to her feet, and here again, there needs to be enough space provided.

Without lunging space, the cow will rise front legs first which can also result in injury.

The problem with providing lunging space is that too much of it can result in the cow simply walking through the cubicle so a compromise of sorts needed to be found with the positioning of rails.

By the turn of the millennium cow comfort had come to the fore. Cubicle divisions were now only supported at the end of the bed to give a totally uninterrupted run from front to back with no anchor points to get in the way.

Known as Super Comfort cubicles, many thousands of them were sold as cubicles became the accepted norm for dairy farmers.

Metalwork aside, a key part of the cubicle was, of course, the actual bed – the concrete structure which forms the base of the unit. And because cows are much larger than they were 40 years ago, cubicles installed a couple of decades ago are unlikely to be big enough for today’s cows.

An uncomfortable cow is likely to spend more time standing up, thereby putting more stress on her feet and causing mobility problems.

In extreme cases she will lie down in slurry-filled passageways.

For Holstein-Friesian cows, the minimum length bed length required is 2.4m and the minimum width 1.17m, though larger cows may require more length and width.

In an ideal world, it would be good to make bespoke cubicles to suit the size of individual cows, but when it comes to concrete beds this is clearly impossible.

For the beds themselves, they need to have a slight fall on them – about 10cm from front to back – so that they can drain into the slurry passageway.

And the step on to the bed needs to be no more than 20cm, which is not too high to climb on to yet high enough to prevent slurry scrapers splashing on to the beds.

It’s one thing to provide a comfortable bed for cows – one where she can lie down and stand up without difficulty as well as ruminate properly – but quite another to get her to lie in it so that when she urinates or defecates it lands in the passageway and not on the bed. It’s a critical measurement and one which can be controlled to some degree by the positioning of the neck rail and the brisket board.

The latest cubicle designs claim to have made some big inroads into meeting these design requirements.

The IAE Ultima cubicle, for example, now has the lower support bar at ground level to provide adequate lunging space and the upper support bar at a height which does not interfere with lunging but can prevent walk-through.

The all-important brisket board is now a polypipe rail tube which IAE says is more hygienic and, with its smooth curved surface, more comfortable for the cows.