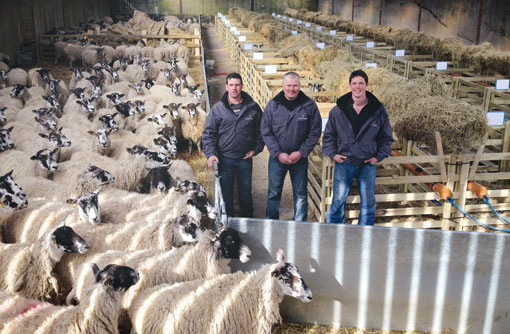 Three years ago Lowther Park Farms in Cumbria had a major rethink on their sheep policy, with a change of breeds, a move from organic to conventional and an increase in numbers.

The sheep business has now entirely switched to North of England Mule ewes, which produce most of their lambs to Beltex cross Charollais tups.

About 200 ewes a day are lambed at the peak of lambing time, and virtually the complete flock is lambed within a four-week period. The highly organised lambing-time team is led by head shepherd John Harrison.

And in a year when scanning results haven’t matched up to expectations in many flocks, the Mules at Lowther achieved 174% – the highest ever achieved on the estate.

“It’s a credit to our team of three shepherds to have achieved this result on the back of last autumn, which threw 2,042mm of rain at us,” says farm manager Richard Price.

The bold decisions made by Mr Price were purely driven by economics. “We had to get a higher output from the flock.

The Lowther family has fully supported the changes, but with about £1M invested in the sheep enterprise, this part of the farming business had to become more efficient, profitable and give a return on investment. Attention to detail and our three highly skilled shepherds are paramount,” says Mr Price.

The restocking with North of England Mules was based on the breed’s reputation for lambing percentage, mothering ability, consistency, durability and longevity.

“Buying both shearlings and running lambs in large numbers has meant a big investment over the last three years, but we want these ewes to give us four or five crops and we’re convinced they can do that.

“Managing risk and volatility will be a tough ask in the future. The North Country Mule achieves these goals and achieves a gross margin of £58 a ewe and a net margin of £370ha,” says Mr Price.

At tupping time the ewes are run in groups ranging from 100-250 sheep, and ram power is high at four tups for every 100 ewes.

The Beltex cross Charollais tups, purchased from well-known tup breeder Paul Slater in Cheshire, are proving their worth by producing top quality lambs for the live market at Penrith, and to fulfil a deadweight marketing contract with supermarket Morrisons.

“We like the Beltex cross Charollais tups because their lambs have plenty of wool on them and give us tremendous growth rate off grass,” he says.

“So often we see lambs going up the race when we’re drawing them and the ones that look as though they’ll weigh 34/35kg go over the scales at 37/38kg. And they are great feed converters, achieving about 4.25:1.”

Tups are turned out on 20 November to get lambing underway from 8 April. Round-bale silage is fed to ewes from 1 December, but no supplementary feed is offered until after scanning in early February.

Feed rates start at 0.5kg a head of an 18% protein nut for triplet and twin-bearing ewes, but three weeks before lambing the protein level is increased to 22% to boost ewes’ colostrum quality.

Post-lambing, there’s a return to the 18% protein feed and while in theory there should be enough grass for ewes and lambs – the reason why lambing is April rather than March – this year has seen ewes fed for longer with concentrates and silage to cope with the spring grass shortage. In a normal season feeding is only continued for one week after lambing.

The estate makes all its own round-bale silage and aims for high quality, well-wrapped forage for ewe feeding. About 20ha of stubble turnips are usually grown – although last year the weather reduced that to just 3ha – and was used for autumn lamb finishing.

No short-cuts are taken on flock health. “We were determined to minimise losses through fluke and the flock has been treated three times – November, December and January – with a flukicide and worm drench as well as an additional mineral treatment. We lost 38 ewes to fluke, but we were pleased we managed to control it to such a low level.”

Faecal egg counts are used to monitor worm burdens in lambs in place of a routine worming policy. This approach has been extremely successful – in conjunction with bringing grass back into the estate’s arable rotation post organic.

Some lambs are only receiving one or two doses, but all are given trace element supplementation to maintain cobalt and selenium levels.