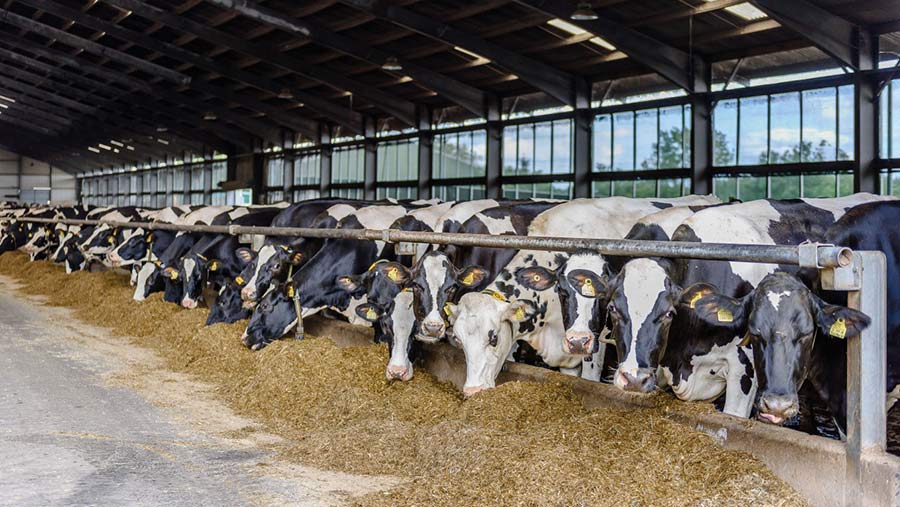 A Welsh dairy farmer who has failed to capture a retailer-aligned contract for his low-carbon milk says pressure must be put on buyers to pay a premium for milk with high environmental credentials.

Sion Davies receives a commodity price for the 10m litres he sells annually, despite it sitting in the top 10% in the UK for low carbon emissions.

An audit measuring its carbon footprint in fat and protein corrected milk has put that figure at 0.88kg CO2e/litre, well below the industry average of 1.31kg CO2e/litre.

Mr Davies has achieved this largely because of high feed conversion efficiency in his high-yielding housed herd, and a 500kw anaerobic digestion plant powered by the farm’s manure, waste silage and old bedding.

But, unlike organic, there is no price recognition for milk with a low carbon footprint.

Mr Davies, who farms with his wife, Audrey, and their daughters, insists this must change and is launching a campaign for carbon labelling on milk.

“Buyers should pay a premium for milk produced with the low-emission methods that consumers and governments are demanding,” he told Farmers Weekly.

And logistics should not be a barrier to high efficiency farms supplying this market, he added.

He said processors won’t offer him a direct contract because his farm is in Carmarthenshire and distant from major creameries.

They have told him that the low carbon story of the milk he produces from his herd of 900 Holsteins at Coomb Farm, Llangynog, isn’t enough.

“I spoke to one processor who suggested the supermarkets would be fighting for my milk if my farm was nearer to the M5 or M6,” he said.

“The supermarkets shout a lot about wanting suppliers to become more sustainable, but they are ignoring the fact that there are already dairy farmers with environmental footprints significantly lower than average, and yet they won’t pay for that milk.’’

Mr Davies is now working with the University of Lincoln in a bid to change that by launching a campaign this summer to raise awareness of low carbon milk.

He does recognise that low carbon could be a divisive issue among farmers because the majority don’t have AD plants and this could be a barrier to low emissions. But he is undeterred.

“Organic and grass-fed milk are niche and there is a good market for those, so why not low carbon milk?”

NFU Cymru dairy board chairwoman Abi Reader agrees. “If the government is acknowledging that there is a global emergency, there needs to be a place for low carbon milk in the marketplace and, without a doubt, there should be a price premium for that.”

Ms Reader admits that use of renewables is a big challenge for Welsh producers, but points out that, with environmental gains to be made from feed efficiency and carbon sequestration, there are good opportunities for many different systems to supply this market.