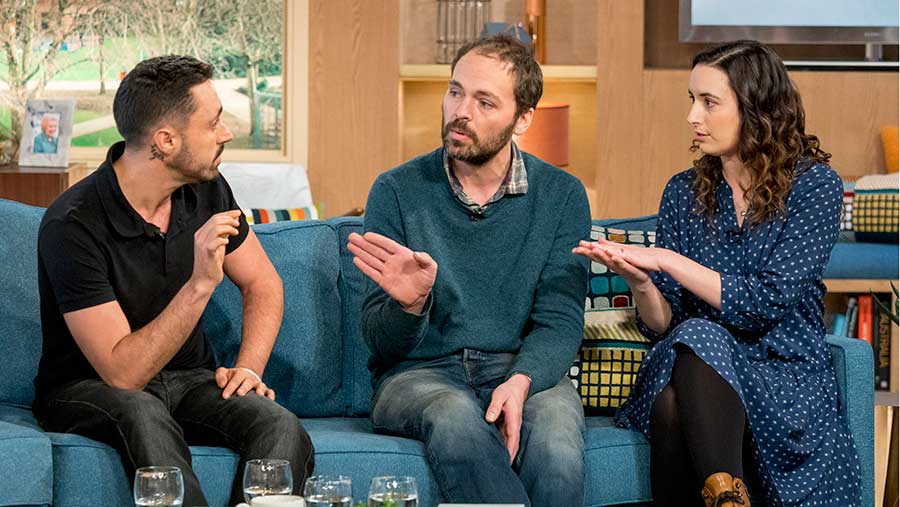 Dairy farmers who were bombarded with hate-filled abuse online by vegan activists have donated their TV appearance money to a cyberbullying charity.

Jonny and Dulcie Crickmore, who run 356ha Fen Farm Dairy, in Bungay, Suffolk, received a barrage of aggressive and hateful comments, including chilling death threats, for posting a photo of calf triplets on their Facebook page.

The couple were left stunned after vegan activists even targeted their two young children in a torrent of abuse lasting five days.

The Crickmores, who won the Farmers Weekly 2017 Diversification Farmer of the Year award, appeared on ITV’s This Morning programme for a debate with an Australian vegan activist to defend the dairy industry against claims of cruelty.

They have decided to donate their £400 appearance fee to the charity cybersmile.org, which helps people and businesses affected by trolling and bullying online.

Mr Crickmore said: “We chose to donate all of our ITV appearance fee because we didn’t think that profiting from a problem like this was right.

“The other reason is that online bullying is becoming a big problem and is clearly unregulated.

“We don’t want our young children to grow up at risk from online bullies. We both felt strongly that we should try to create something positive out of this horrible experience.”

The Crickmores described the death threats as “very worrying”, as they did not know how seriously to take them.

“Trolls were threatening to take our children away, if we took our calves away from their mothers,” explained Mr Crickmore.

“We chose not to respond to any of the trolls as we soon realised these people didn’t want to ask genuine questions but to damage our business and other dairy farms too.”

The couple have reported the threats to Suffolk Police.

Mr Crickmore said only three of the hundreds of activists bothered to contact them to enquire about their practices.

“When I explained why we took the calves away and why animal welfare was also at the top of my agenda, they seemed to be more understanding,” he added.

“I also explained what would happen to a cow if they became old, where would all the animals live, how could we afford to keep them all and so on.”

The couple advised other farmers who come under fire from vegan activists not to respond to the comments instantly.

“Cool down and think them through before deciding which way the conversation is going to go”.

Mr Crickmore said many vegan activists who targeted them “didn’t have a clue about farming” and seemed “brainwashed by vegan videos”.

He urged the industry to raise its game, be transparent and educate the public on food and farming.

“There are definitely bad practices out there, but the people in the industry who are doing the right thing need to be more open and things like Open Farm Sunday and school trips need to be done more. The government needs to work more on this subject as well as taking steps to control online bullying.”