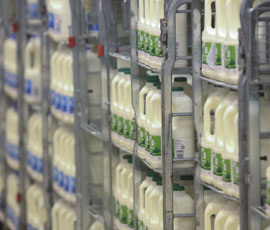 Farmgate milk prices may be under severe pressure, but the retail value of all dairy-based products has grown for the seventh consecutive year, Giles Quick from Kantar Worldpanel told the AHDB Outlook conference in London.

Annual spending on dairy had grown by more than 4% for the past seven years and was worth a total of £10.12bn, equivalent to 12.4% of all food and drink spending, he said. That compared with overall grocery price inflation that was running at around 5.5%.

Mr Quick acknowledged much of the rise in dairy spending could have been driven by increased spending on more expensive added value products, rather than shoppers buying more or paying more for core products such as milk, cheese and butter – which had been subject to heavy discounting by retailers.

The dynamics of what people were buying had changed during the recession, he said. “We’ve seen a big switch from branded to own label, with people buying the same sort of stuff, but cheaper.”

Price promotions were now a key strategy used by retailers, with an unprecedented 40p in every pound spent on deals, he added.


What’s your view on the dairy milk cuts? Have your say on our website forum.