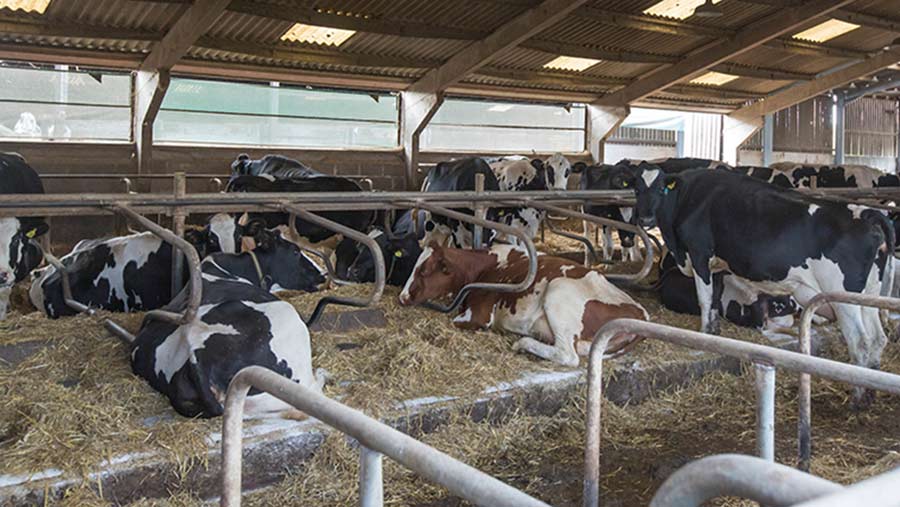 Mastitis can lead to serious issues with milk quality and result in the suspension of milk contracts, but the problem can be tackled successfully.

Vet Ellie Button explains how one robotic dairy farm was affected and the steps that were taken to put a mastitis plan in place.

The dairy farm’s Arla 360 milk contract was suspended because of a persistently high bulk milk somatic cell count (SCC). After a robust control plan was introduced, bulk SCC went down to 127-160,000 cells/ml.

This improvement meant the Arla 360 contract was reinstated and there have been only four cases of clinical mastitis since February.

The control plan was implemented on a 110-cow robotic dairy herd in October 2020 with the help of an AHDB Mastitis Control Plan adviser.

At the time, the farmer had just been suspended from the Arla 360 contract because their 12-month average bulk SCC was 271,000 cells/ml.

There were high rates of clinical mastitis on the farm. However, the farm had already been milk-recording for the past year, so there was 12 months of data to analyse.

2. Carry out a herd-pattern analysis

Using the mastitis control plan herd-pattern analysis tool, the next step was to analyse the data to better understand where infections were occurring.

This showed that the prominent issue at the time was environmental lactation.

From this point, the farmer was provided with a questionnaire. This was followed up with a farm visit where they focused on the lactating cow environment (cubicles), as well as looking at the recording and treatment of clinical mastitis.

Bacteriology was also carried out on four clinical mastitis samples, which showed growths of E coli, and one of E coli and Proteus mirabilis.

During the visit, the key areas of concern were identified as:

With these target areas defined, the software generated a list of recommendations, which were then refined and presented to the farmer. These included:

As the farm uses a robotic system, some of these recommendations were not practical nor feasible.

The plan that was implemented included:

A second review took place in June. Bulk SCC was between 127-160,000 cells/ml and only four cases of clinical mastitis had been reported since February.

A new set of recommendations were given, including using lime as a bedding conditioner and better management of the dry cow environment.

Ellie Button was speaking at the British Mastitis Conference (10 November 2021).