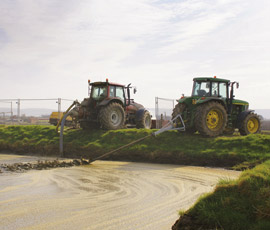 Up to 50% of livestock producers in Nitrate Vulnerable Zones (NVZs) could still be non-compliant with slurry storage requirements brought into force last year, according to the Environment Agency.

As of 1 January 2012, cattle producers were required to have five months’ storage and pig producers, six.

Those farmers not complying are breaking the law and the Environment Agency warns it is likely the government will start upping its game and enforcing penalties.

“Time is ticking and the longer you leave it, the more likely you will get caught,” says Nigel Crane, environment and business senior adviser for the Environment Agency.

“The financial situation has not helped farmers and last year’s wet weather meant their attention was elsewhere, but if they aren’t yet compliant, they’re nearly two years late.”

Failure to comply is a criminal offence and could result in reductions in single farm payment as well as prosecution and a fine, which could be as much as £10,000 in a magistrates court.

William Phillips of P and L AgriConsulting stresses that non-compliant farmers are not only breaking the law, but also wasting a valuable nutrient.

“If you haven’t got correct storage and you are forced to spread slurry when the plant doesn’t require it, there will be an element of waste,” he says.

When farmers are forced to spread during the closed period for slurry application, this would also constitute another breach of regulations, while also damaging soils and adversely affecting cropping and yields.

Mr Phillips urges producers to act now and ask what they can do to minimise slurry production.

“In some cases there may be ways to reduce the amount of slurry produced by limiting the amount of rainwater entering the slurry store for example. However in a lot of cases, investing in storage may be the only option,” he says.

The first step is to assess how much slurry is being produced over the storage period and how much is dirty water. Dirty water can be spread during the closed period, whereas slurry cannot, so separating off this water can save on storage requirements.

As soon as water runs into slurry it is classed as slurry and cannot be spread. When water falls on a scraped collecting yard for example, this could be classed as dirty water.