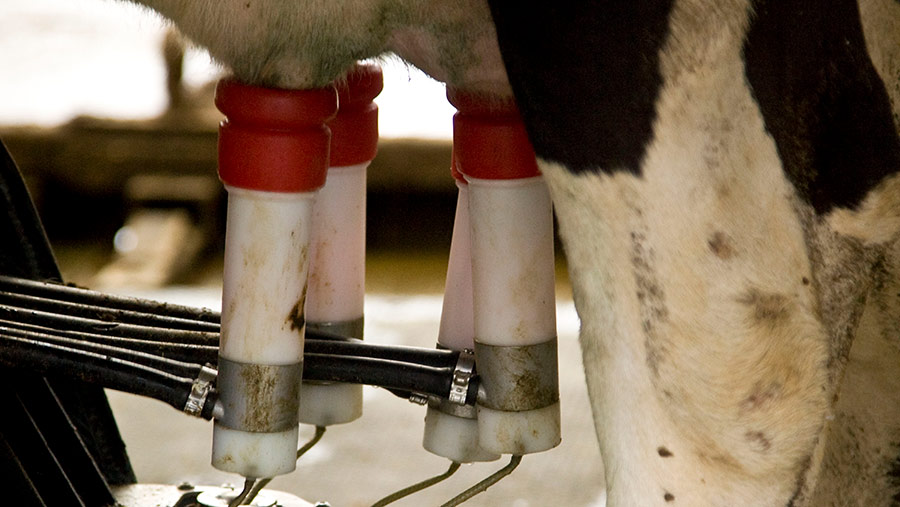 Automatic milking systems are growing in popularity due to the lifestyle benefits they afford farmers.

Tom Greenham from Advance Milking says for a significant number of herds, this challenge can last years, not just months, if farmers do not acknowledge the risk.

But it is not all “doom and gloom”, and there are measures that can be put in place to overcome this challenge, he adds.

At the recent British Mastitis Conference, Mr Greenham discussed the risk factors that can jeopardise udder health and what farmers can do to overcome these.

In AMS herds, the intervals for milking are highly variable between cows. There is a tendency towards more frequent milking (2.5-3 times/day) and shorter intervals in between.

Studies have demonstrated that more frequent milking can be beneficial to udder health, but irregular milking intervals are associated with clinical mastitis in AMS. These irregular intervals can lead to increased intramammary pressure and milk leakage, outweighing the potential benefits of higher milking frequency.

Sheds housing AMS are never empty of cows, so it can be more difficult to keep passageways and feed areas clean. Some areas of the building can be inaccessible to automatic scrapers, such as passageways or the entry and exit areas of the robot.

This can present challenges for cow cleanliness, which is critical to udder health.

Lameness can also be a problem. Slatted floors are popular in robotic sheds, but these can cause increased levels of lameness and reduced mobility, which then reduces milking visits and affects udder health. Lame cows also queue at the robot more often and are displaced by dominant cows, which exacerbates cleanliness issues.

Foot-baths are commonly sited at the exit of the robot, but they can be a significant source of bacterial contamination because there is a “splash risk’ when teat ends are still open.

Studies have shown trace element imbalances can be found in AMS where concentrate is used as a tactic to increase visits.

In this scenario, cows get more of their concentrate in the box than in their partial mixed ration (PMR). AMS parlour cake is often lower in minerals to encourage visits by improving palatability, and deficiencies in selenium have been found in AMS herds. Other studies have found positive correlations between low selenium intake and higher levels of clinical mastitis.

There are no clear advantages between brushes and dip cups. If teats are heavily soiled, brushes tend to give a better reduction in bacteria levels, but if teats are mildly or moderately soiled, teat cups can work better.

Teat cups can be kicked off by agitated cows and brushes can have trouble locating teats accurately, especially if the robot arm height setting is inappropriate for the udder height.

Post-milking, the teat coverage by spray systems can also be highly variable.

Higher number of cow passes in AMS, compared with CMS, increases the potential for contamination with contagious pathogens such as Staphylococcus aureus.

AMS technology tends to give a gentle milking with improved milk let down and a reduction in overmilking. This is because the machines are highly consistent.

However, if clusters are incorrectly positioned due to cameras or lasers being knocked out, there can be increased failure to milk out quarters, which can lead to clinical mastitis.

Sometimes human error is to blame for poor milking quality. Some farmers reduce the lag time between teat stimulation and the start of milking because they incorrectly think it reduces box time. This is a false economy. Skimping on teat preparation can actually increase box time because milk flow rates drop drastically.

The detection of mastitis is an on-going challenge for all robotic manufacturers. Relatively low specificity values mean a high proportion of the herd can be incorrectly flagged as having mastitis.

This can lead to farmers either overtreating or ignoring warnings, which means mastitis goes undiagnosed, leading to poor treatment success.