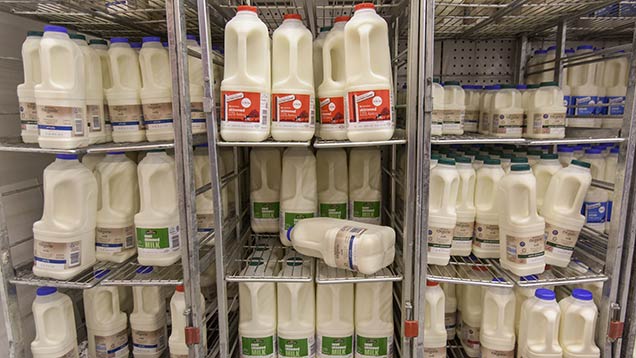 The dairy industry must innovate to meet changes in consumer demands and tackle the growing threat from alternative dairy products.

Judith Bryans, chief executive at Dairy UK, said the dairy industry was currently facing “seriously difficult times” and there was no “magic bullet”.

But she reassured producers “nothing earth shattering” would happen after the abolition of quotas on 1 April.

Dr Bryans said prices might be lower globally until additional milk from the EU is absorbed. But she said she believed producers would cut production worldwide and the market would osculate back.

Speaking at the British Cattle Breeders Conference, Telford, Dr Bryans said: “A lot of people will step back and look at what they’re doing until the world market rights itself.”

However, she said the industry must take the threat from alternative dairy products seriously and capitalise of the “snackification” of cereals if it is to retain market share.

“If breakfast moves to ‘on-the-run’, what is going to happen to that 40% of milk that’s being consumed with breakfast cereals?

“It is definitely a threat, but it is also an opportunity,” Dr Bryans added.

She said alternative dairy products such as Alpro, which is now the third largest milk brand, were a “real threat” and the dairy industry was not taking them seriously enough.

She said alternatives made dairy look bad to make themselves look good by claiming they contained added calcium and B vitamins, but were lower saturated fat than semi-skimmed milk.

“These competitive kind of claims are not claims that should be made. They are not milk. They are juice.

“They step over the line and have the consumer thinking they are nutritionally equivalent to dairy foods.”

Under European designation rules, soya cannot call itself milk, but products are allowed to say almond milk or coconut milk, she explained.

Dr Bryans said she had been in discussions with the European Dairy Association and would be garnering support from Dairy UK’s European counterparts to go to the commission to discuss the issue further.

In the meantime she said everybody in the dairy industry should promote the natural, nutritional benefits of dairy products.