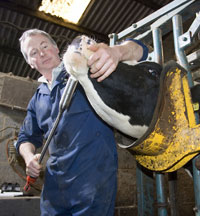 Might micro-nutrition be the solution to niggling problems at calving?

Facing all the usual snags, Gloucestershire dairy herd manager, Rob Costello, had never considered that a lack of vitamins and minerals could be the source of the trouble.

But having looked at it more closely it seems the common problems – such as displaced abomasums, cows not cleansing, milk fever and lethargy among cows and calves – could be down to micro-nutrition.

For the 190 autumn-calving Holstein Friesian herd at Whalley Farm, Cheltenham, vitamin and mineral boluses have knocked at least 5-7% off the culling rate, increased conception rates by 15% and boosted milk yield by 400 litres a cow over the lactation. Consequently, profits are significantly up and cow health and welfare has improved, says Mr Costello.

“Prior to using Agrimin boluses back in 2002, cows were often sluggish after calving and they didn’t have that ‘get up and go’ we would have expected. That meant they weren’t giving their full potential for at least four or five days afterwards. This was also having a knock-on effect on the youngsters, as calvings were not always smooth, stressing calves right from the beginning.

“With cows only giving birth between August and December, it is even more important we don’t have any sort of check at calving,” he says.

Another headache for Mr Costello was the number of cows with retained cleansings having a long-term impact on fertility. With milk fever also lurking in the background – at a cost of £100 a case – these small, but expensive problems were something Whalley Farm wanted to get sorted.

After involving the vet and taking blood samples, it became apparent that many of the cows were deficient in vital trace elements such as copper, iodine, selenium and calcium.

“I was giving cows mineral buckets when out in the field, so I never guessed they would have been deficient because you just assume the cows are getting equal amounts,” he says.

He now uses two different boluses a high iodine version at drying off and a calcium dose post-calving.

“Two iodine boluses are given to all cows as they are dried off, lasting the whole dry period. These also contain micronutrients such as copper, selenium and vitamin D.

“Because we push cows so hard they need to have a well-balanced diet and the TMR we feed needs to be supplemented. Now cows are calving down with more energy and calves are being born more smoothly and under less stress.”

In fact Mr Costello says that with less trauma at birth, it is now possible to wean calves at five to six weeks old, a couple of weeks earlier than before. As well as the smoother birthing process, this is also put down to down to the improved nutritional value and availability of colostrum.

“Before using boluses we were getting a substantial amount of milk fever, with a lot of sub-clinical cases as well. When cows went down during the night after giving birth calves weren’t getting the vital first milk needed in the initial six hours after birth.

“Automatically not receiving essential antibodies hindered their development. Now calves receive the same milk from their mother for the first five days,” he says.

At the first signs of parturition, Mr Costello gives cows going into their third lactation and subsequent ones a calcium bolus, with a further two boluses after calving.

“We rarely get cases of milk fever and, at a cost of £100 for every case of milk fever, it is cheaper to give high-risk cows a £30 calcium bolus to prevent them from getting it. We also noticed that cows getting milk fever were normally 30% more likely to suffer with mastitis, so all round it’s a win-win situation.”

“Lactations have increased by 400 litres a cow because when they start milking they the have energy to work hard, probably a combination of the iodine and calcium bolus. Cows now average 9200 litres a year,” he says.

“As a result of less milk fever, displaced abomasums and generally healthier cows the culling rate has dropped, too,” he says.

“Using boluses more than pays for itself. Admittedly, I was a bit sceptical at first, but now because of peace of mind and the positive effect it has on the cows, I wouldn’t farm without them.”