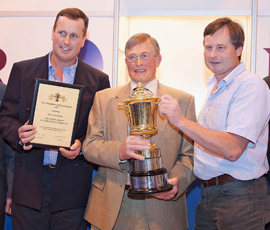 The Higgins family from Wilderley Hall Farms, Shropshire have scooped the NMR/RABDF Goldcup Award at the Livestock event.

The farm is run by brothers Andrew and Bill, supported by parents Bill and Margaret who manage the 316 cows and 266 followers that make up the pedigree Holstein Wilderley herd.

The Higgins have increased cow numbers and performance on their 145-hectare unit in the past 15 years through breeding their own top quality replacements. Cows have been bred consistently for production with good functional type.

Their aim remains to breed a uniform herd of top cows. Calving is year round with a calving interval for the qualifying year of 433days. Milk is sold via Muller/Wiseman to Tesco.

Presenting the award at the Livestock Event RABDF chairman and chairman of the Gold Cup judges Ian Macalpine described this herd as a shining example of attention to detail right through the dairy business.

“Every aspect of calf rearing through to the milking herd’s routines is managed with great care and to an exceptional standard. This herd is well bred, well cared for and as a result it is performing to a very high level which is reflected in its production data and its overall lifetime daily yield.”

Runner up and recipients of the NMR Silver Salver were David, Sheila and James Tomlinson who manage the 230-cow Bilsrow Holstein herd from Bilsborrow, Preston in Lancashire.

Breeding decisions in the Tomlinson’s herd are based on a balance of type and production and have always underpinned the progress and success of this herd, which achieved an average yield of 10,538kg of milk at 4.41% fat and 3.14% protein on twice-a-day milking. Milk is sold to local cheese makers Dewlay at Garstang.

Winner of the Chris May Memorial Award, given to the Gold Cup qualifying herd with the higher average lifetime daily yield (LDY), is Nick Cobb from Dorchester, Dorset. His 731-cow herd achieved an average LDY of 19.47kg/day for the year ending September 2012 and has a calving interval of 383 days.

More dairy news from the Livestock event: Growing sense of optimism about dairy futureFor more on this topic