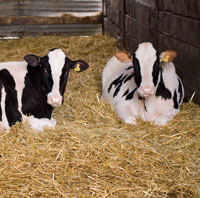 The dry period is a critical time for dairy cows and getting the management wrong impacts on the whole lactation, says Gwyn Jones, Wern Vet Surgeons, Ruthin, north Wales.

“The success and productivity of the whole lactation depends on getting the freshly calved cow into production gently and smoothly,” he says.

There are three critical stages: The early period, the transition period and the freshly calved cow.

The early dry period is meant to be a break for the dairy cow, a time in which she can rest important organs and tissues. However, she still needs to be actively managed, says Mr Jones.

“Producers should aim to keep dry cows at a body condition score of 2.5-3, while still maintaining high dry matter intakes to avoid displaced abomasums in the subsequent lactation, by feeding a low energy, high fibre diet,” he says.

“Dry cows at all stages – housed or grazed – should have ad-lib access to good quality, palatable straw or hay, and should be eating at least 4kg a day of it when out at grass. All forages must also be of good quality so intakes are maximised.”

Over-feeding of high energy feeds leads to fat cows, which then suffer from calving difficulties, milk fever and poor feed intakes after calving, he explains. “Under-feeding can result in a fatty liver, and poor rumen fill often leads to displaced abomasums.”

From three weeks pre-calving, represents a time when the cow should be primed for the subsequent lactation, says Mr Jones.

“Producers should introduce as many ingredients of the early lactation ration as possible, to stimulate rumen function and rumen microbes. This will maximise post-calving dry matter intakes and hence energy, with much less risk of ruminal acidosis.”

Freshly calved cows are most fragile and must be treated carefully, warns Mr Jones.

“Cow are sore after giving birth, their blood calcium is on a knife-edge and their ligaments and tendons are soft. The rumen is still not expanded, so dry matter intakes will only be about 10kg a day initially, and the immune system is directing its resources towards clearing out the uterus, so they will be more prone to other infections.”

Mr Jones advises housing cows on clean, thick bedding to avoid mastitis with feed fresh and easily accessible and parlour cake increased gradually by 2kg a week, up to a maximum of 8kg a day.

Producers should also avoid over-fat dry cows, as they are more prone to ketosis and milk fever, he says.

“Animals suffering from ketosis or sub-clinical ketosis typically take 20-22 days longer to get into calf. And for every recognised case of acidosis or displaced abomasum there are probably another 10 cows with reduced dry matter intakes, which will have sub-optimal milk yield, milk quality and fertility.”

Member, Andrew Warren, who keeps 240 cows at Bengrove Farm, Sandhurst, Gloucestershire, says there was a demand in the group to learn about the latest practical approaches to transition cow management.

“Transition is the most important stage of the lactation – it sets you up for the whole of the next lactation. And training is crucial because it brings us closer together and helps us move forward and face new challenges – nothing stays the same,” says Mr Warren.

Armed with some farm-specific information on calving intervals, cull cows and service figures, Mr Jones offered his own benchmarking advice to group members, identifying areas where management – and therefore profits – could be improved.

Although it is too early to see dramatic results back in Gloucestershire, Mr Warren is convinced the trip will yield benefits. “Like all things, it is attention to detail – getting the cows on the right ration, and getting the balance right. I’ve had good feedback from the group, and I am trying harder to get it right back at home.”