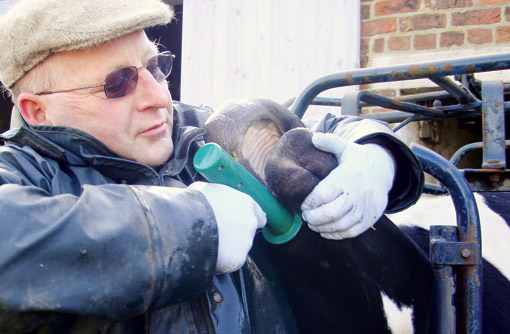 Reoccurring subclinical milk fever can be a major concern among high yielding milk producers, with the cost of a clinical case running to hundreds of pounds. Dairy Update finds out how a high yielding dairy farm has tackled the issue

It has been argued the direct cost of a case of clinical milk fever at £65, with indirect costs from reduced fertility and a greater likelihood of culling can add up to £200-300 a case. And, at a time when dairy farmers are reeling from the effects of low milk prices, this is unsustainable.

Dairy farmers Harry and his father Chris Corbett who milk 260-280 Holstein Friesians on the family farm at Epwell, near Banbury, were getting lots of cases up until 18 months ago.

The herd is high yielding thanks to a combination of the high genetic base and good management, with cows averaging 12,300 litres and the heifers, 9,300 litres.

Chris explains that the cows are capable of coming into milk very quickly after calving making them vulnerable to milk fever.

“We were not only seeing subclinical milk fever, but were also seeing a number of displaced abomasums, and the combination of both these problems were leading to decreased milk yields, and increased vets bills,” he says.

So working with their nutritionist, Barry Audis of BMA Consultancy and James McCulloch from Agrimin, the Corbetts decided to try administering calcium boluses.

Mr Audis initially looked closely at the conditions on the farm, seeing that the borehole water was high in calcium, as was the case with the grass silage. However, as the grass silage had to be fed to provide the adequate effective rumen degradable protein, this led to the standard diet being too high in calcium, which switches off the calcium production in the body at calving time.

Due to the problems Chris had experienced in the past due to milk fever, Mr Audis prepared a transition close-up dry cow diet, which is based on a Dietary Cation Anion Balanced diet. The current transition diet is:

Mr Audis also strongly advised the use of calcium boluses, which are administered at point of calving, giving a slow release of calcium over 36 hours, in contrast to injectable calcium which only last for four to six hours.

James McCulloch of Agrimin says farm trials have confirmed the efficacy of giving cows a rapid boost of calcium chloride and a sustained release of calcium sulphate.

After administering, the bolus coating dissolves in the rumen and disintegrates completely within 30 minutes. The calcium chloride is rapidly absorbed and the calcium sulphate is absorbed over a longer period, giving a sustained supply of calcium.

Since administering the bolus, the Corbetts have seen milk fever disappear completely among the older cows. This has not been the only benefit, however, says Chris. “I am seeing no displaced abomasums, and having no retained cleansings.

“Up until 18 month ago, I was dealing with the problems of milk fever, after it had occurred, by putting in a bottle of calcium into the cow.” Chris explains. “But now, it’s a 10 second job to administer the bolus and it’s very easy.

“Cow health and welfare at calving has greatly improved, vets bills are down and milk yields remain high.”

Mr Audis adds: “Cows pre- and post-calving need special attention, and this extra attention should not be seen as added work and hassle, but should be treated as the profit earning potential for the new lactation.”