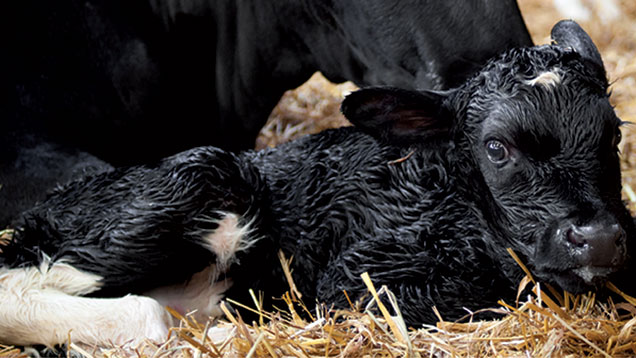 Many farmers know what their calving interval is, but there are better fertility measures. Rhian Price and Gemma Claxton take a closer look.


There is growing industry consensus that calving interval is starting to be superseded by more up-to-date measures of herd fertility.

Huw Lloyd, technical services director at dairy genetics company Genus, believes calving interval is a historic and outdated value and more accurate measures such as 21-day pregnancy rates should be used instead.

He says there are two essential flaws with calving interval.

First, calving interval requires there to be two calving events, so it does not count first-lactation animals.

With first-lactation animals making up one-third of many herds, a large proportion of cows are disqualified in this measure.

“Heifers and first calvers can make up 25% of the herd. In some cases the proportion can be even higher at 40%, so we can’t expect the farmer to make management decisions to improve reproductive efficiency when he is potentially excluding nearly half of his herd,” explains Mr Lloyd.

Mr Lloyd says this in itself can be a significant weak link in improving herd fertility.

“In order to improve fertility rates, farmers must be able to understand why cows in the herd aren’t becoming pregnant,” he explains.

The 21-day pregnancy measure shows the proportion of eligible cows that become pregnant in each 21-day cycle.

It is calculated by dividing the number of successful pregnancies by the number of eligible cows presented for service and is, therefore, an outcome of submission rates multiplied by conception rates.

However, he says there are challenges to its application in block-calving herds.

“It may not be the most useful figure for all herds, particularly spring calvers. It is a useful retrospective measure, but it wouldn’t be useful during the breeding season.”

The primary reason for this, he says, is because it is not an immediate enough figure.

“For example, spring-calving cows would be 35 days beyond service before they show up a 21-day pregnancy rate, so you are 56 days into your breeding period – almost halfway through the breeding season.”

Instead he says 18-24-day return rates are a much more effective measure for block-calving herds, because of their focus on keeping a tight calving pattern.

Stuart Russell from Nantwich farm vets, Cheshire, believes 21-day pregnancy rate is the most important indicator of recent fertility for the majority of herds.

As a result it is the only fertility record the practice uses on its monthly breeding reports for clients, alongside 21-day insemination rates, although other measures are sometimes used when looking for areas to improve.

“Unfortunately, in the UK we have been using the completely wrong thing. I stopped using calving interval altogether a number of years ago,” he admits.

As calving interval is a measure of the time between one calving and the next and averages data from all calvings in the past 12 months, he says it means it can be more than two years out of date, so changes in fertility today won’t fully come into effect for another 24 months.

Mr Russell says 20% pregnancy rates should be an achievable target for most herds.

However, he says many farmers become frustrated because these targets aren’t met.

“In my experience, it is unlikely people will reach an annual average of 20% using normal heat detection and conception rates. The maximum people tend to reach is 16-17% by relying only on heat detection.”

But he says higher levels can be achieved by introducing a structured synchronisation programme.

The crucial thing is to get cows in calf quickly after calving, as focussing interventions only on cows later in lactation will change 21-day pregnancy rates very little.

“Ideally, you need to be talking with your vet or breeding consultant to make sure current protocols are not limiting the potential fertility of your herd,” he adds.

‘Diet nearly always at the heart of a problem’

One Yorkshire dairy farmer says using 21-day pregnancy rates is allowing him to access real-time data to respond rapidly to any fall in fertility.

Jonathan Caygill, who runs a herd of 250 year-round-calving Holstein-Friesians in Skipton, says: “Pregnancy rates show what has happened in the past two months. We can remember where we’ve gone wrong and try not to make the same mistake twice.”

He switched to recording 21-day pregnancy rates instead of calving index after falling into a vicious cycle with fat cows that were struggling to get back in calf.

Recording 21-day pregnancy rates allows him to keep a closer eye on the energy content of his 100% total mixed ration. This is crucial, as one of the main issues affecting the herd’s fertility is a dip in energy due to changes in silage quality, he says.

“With silage being such a large part of the diet, a fall of 0.5MJ can have a big effect on pregnancy rates.

“When we have a problem, it is nearly always the diet, but because 21-day pregnancy rates are recorded so close to the event, we can change the diet quicker and increase energy,” explains Mr Caygill.

At Manor Farm they have been using pregnancy rates as an indication of herd fertility for the past five years and it is now an impressive 24% – significantly higher than the national average of about 13-15%.

Cows are given a voluntary waiting period of 50 days before being AI’d. The 21-day pregnancy rate is displayed and updated every fortnight after PD-ing.


If the rate has dropped, all staff involved with the herd discuss the cause and decide on an action plan, says Mr Caygill.