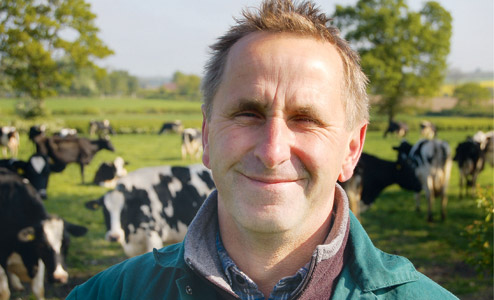 With feed costs escalating and becoming increasingly volatile, what is the scope for reducing purchased feed use? Dairy Update speaks to one Leicestershire producer to find out

Those dairy producers looking to get more bang for their buck should take heed from Greg and Annette Fletcher of Woodview Farm, Stapleton, who have not only increased milk yield a cow by 650 litres, but also reduced feed rate a litre from 0.4kg/litre to 0.25kg/litre.

The Fletchers, who milk 190 cows in partnership with Mr Fletcher’s parents, had looked to increase output, which had meant housing cows for longer with reduced dependence on grazing, and investing in new buildings and parlour with an increased reliance on purchased feed.

However, performance had not increased as anticipated and while yields were averaging 8,500 litres a cow, feed rate had risen to 0.4kg/litre. Although margins were better than average, Mr Fletcher felt the system should be delivering more.

“As well as the high feed rate, we were including a range of additives to try and get the cows to perform and this was pushing up feed costs,” he explains. “We weren’t exploiting the potential of the high-quality forages we made and I was beginning to question the sustainability of the approach.”

In October 2009 the partnership joined the Promar Dairy Excellence Service and since then has been working closely with principal consultant Emma Thompson to review and restructure the dairy enterprise. The result has been a significant reduction in purchased feed use which, combined with improvements in milk yield and fertility, has contributed to a big increase in margins and profitability.

The initial objective was to simplify the feeding system and produce a more rumen-friendly ration to exploit the potential of home-grown feed. The proportion of forage was increased to promote better rumen function. This allowed costs to be reduced by taking rumen buffers out of the diet.

The other thing was to make sure the feed was getting to the right cows, Mrs Thompson explains. “The herd was effectively running as one milking group and fed a single TMR. This was pushing up overall feed costs and was also leading to late-lactation cows getting fat, which was affecting fertility.”

The herd was split into a fresh- calved group and a main milking herd, with specific diets formulated for each group. “We give the fresh cows plenty of space as by reducing housing pressure we can ensure they have ample access to feed and can settle into lactation. Once confirmed in-calf they move into the main milking group, where the diet contains a higher proportion of forages, which these cows are well placed to exploit,” Mrs Thompson continues.

The other big change was to make much better use of grazing. As the herd calves all year round, the herd grazes as two groups. Now the fresh calvers graze in the day only while the milking group goes out day and night.

Mr Fletcher measures grass growth every week using a plate meter. The results are used to refine the formulation of the buffer feed, which has helped to reduce feed use in the summer and further increase production from forage. The farm tries to produce as much quality forage as possible and grows maize and lucerne.

The benefits of the refined system are considerable. Milk yield a cow has risen by 650 litres, while feed rate a litre has reduced from 0.4kg/litres to 0.25kg/litres. Despite a £42 increase in feed price a tonne, feed cost a litre has reduced by nearly 2p/litre. Yield from forage has doubled from 1,451 litres a cow to 3,994 litres and now more than 43% of all production is from forage.

“We had got into a vicious circle of using purchased feeds to try and drive output and lost sight of the simple fact that cows are forage users.

“Now our focus is on maximising forage use, which has allowed us to reduce purchased feed costs and increase profits year on year. With current feed prices, I doubt the previous system would have been tenable,” Mr Fletcher says.

Huge range in feed use is big opportunity

Analysis of data from the Promar Farm Business Accounts service shows the efficiency of purchased feed use varies markedly between farms.

The graph (right) shows the relationship between feed use and milk yield and illustrates the potential for improving efficiency of feed use. As feed use increases, so does milk yield, but the relationship is not a straight line, comments Promar principal consultant Emma Thompson.

“Perhaps most significant is the range in performance achieved at any given level of feed input. For example, farms feeding 3,000kg concentrates a cow a year produced anywhere from 6,000-9,000 litres a cow. At 28p/litre, that’s a difference of £840 milk income for the same annual feed cost and that is a huge difference, worth £126,000 for a 150-cow herd.”

“Many of the reasons for better efficiency will come down to management, including improved fertility, better cow health, genetic merit, cow comfort, water availability and forage quality and quantity.

“Another big area is the attitude and approach taken to feeding cows. Many farmers will see an increase in feed efficiency simply by ensuring the feed gets to the cows that really need it. This may mean looking at grouping cows more effectively and adjusting the diet between groups. Or it could mean reducing the level of the base TMR ration and feeding more through the parlour.

“Physical factors that prevent cows from eating also affect feed efficiency. Anything that makes it easier for cows to eat will increase intakes, so make sure they don’t have to reach far for their food, look at ways to reduce the time cows are away from feed and make sure feed is always available.”