So it’s no wonder the average herd size is only 68 head producing 29kg a day and a butterfat of 3.7%. With 94% of Holsteins, 3% Jerseys and 3% Ayrshires making up the Canadian dairy population, genetics is the key consideration in most enterprises, “genomics” being the new buzzword for many farmers.

A recent visit to the province of Ontario, Canada, found some farms about 10 years behind in animal welfare, with 65% of cows still housed in tie stalls and veal crates still widely used. Traceability of cows is not compulsory unless animals are leaving the farm or are registered to a herd book or milk-recording service, so it seems a far cry from the red tape surrounding UK dairy farmers.

Consumers and supermarkets are most definitely not the driving force in their industry, rather it is the farmers themselves who are pushing for change change in legislation and better traceability throughout the whole system.

One farmer keen to protect his own destiny, making a more transparent industry, is Ben Loewith of Summitholm Holsteins. Milking 330 cows three times a day, he is not the average Canadian dairy farmer, but believes you need to be expanding to drive revenue. 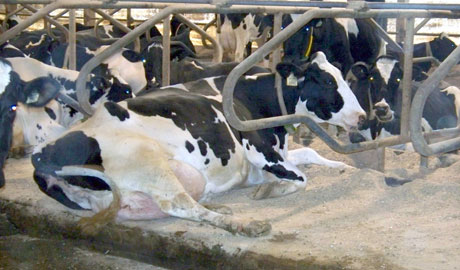 Raking and bedding four times a day is labour intensive, but good for cow welfare

But Mr Loewith believes high tariffs prevent milk being imported into Canada. “There are zero subsidies for dairy farmers, so 100% revenue is from the market place. It is dairy farmers choosing not to have subsidies, and with regard to quotas I’d sooner keep them. Looking at those countries having lost quotas, it never seems to have benefited the farmer,” he says.

Mr Loewith, who farms with his father Carl and uncle Dave, is chairman of Dairy Farmers of Ontario (DFO), a milk marketing board financed and controlled by farmers, establishing prices for raw milk and administering supply management.

“Farmers have a big input into the industry and because of this control we get less government interference. Through DFO we can command a good deal, creating price stability. Currently we are getting 70 cents/litre.”

This price stability means investment is more common because there is less risk, and with quotas representing 75% of total equity, it is no wonder growth is slow and often internal.

For Mr Loewith 95% of revenue is from milk, the other 5% comes from cow sales. “Although this is only a small percentage, this 5% represents 20-25% of all profit on farms,” he says.

In 1999 more than $2m (£1.09m) was invested into a new barn and parlour. But there is nothing fancy about this operation. There is no electronic identification and all heat detection is done visually. The system is proving successful conception to first service is at 39% and average days open is 112.

But for this simply-run unit cow welfare is paramount in meeting their mission statement: “To meet the needs of every cow, every day.”

Cows are housed in stalls with no brisket board, allowing them to lunge forward freely. Sand bedding is raked fours times a day and dry sand added on top, which Mr Loewith admits is inefficient from a labour perspective, but great for animal welfare.

Dry cow management is important. First-calved heifers are dried off 60 days before calving and mature cows at 55 days. “Heifers are housed separately, so there is no social conflict,” he says.

Cows are dried off on maize silage and straw with a mineral supplement and intakes are usually 13-13.5kg. Any cow with a somatic cell count above 200,000 is tubed with an antibiotic and Orbaseal and those below receive Orbaseal only. Dry cows are stocked at 100%, so there is no competition for space.

Heifer rearing is also important and heifers are bred on weight rather than age, average breeding age being 12.5 months at 360-380kg. All animals are bred by AI, with 2.3 straws used on average a conception.

“If a cow has not taken by 70 days they are given a prostaglandin injection. But hormone injections are not given routinely,” he says. “Infertility is the number-one reason for culling 8% of cows being culled because of this.

“I want there to be a transparency about my practice. Consumers wouldn’t like to drink milk with the knowledge that cows are receiving hormones routinely, so this is why we only do it when needed. This is why we have another mission statement saying we will profitably produce a wholesome and nutritious product that the market demands,” he adds.

Tie stalls not bad for welfare?

A wholesome and nutritious product is certainly what the consumers are demanding in Canada, with advertising on healthy eating paramount. Animal welfare isn’t something featuring widely in consumers’ minds, as 65% of cows are still housed in tie stalls. But do tie stalls necessarily mean bad welfare?

One of the most successful dairy farmers in Canada uses them and believes they maximise animal health and welfare. John Bos, Cambridge, Ontario, is milking 150 cows and averages five lactations a cow and has won several awards for his breeding success.

Mr Bos’ approach is to breed a balanced cow, with good feet, legs, udders, size and strength. “I don’t see tie stalls as an issue in respect to animal welfare,” he says. “When constructing the new parlour two years ago it was built with comfort in mind. 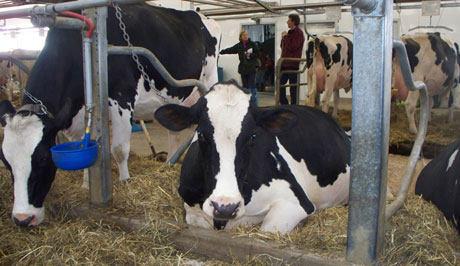 In Canada, 65% of all dairy cows are still housed in tie stalls

“There is never any cow competition, which means intakes are maintained at 26kg a day. Milk yield averages 10,500 litres at 4.2% butterfat and 5.33% protein on twice-daily milking. Cows are housed on rubber matting with straw bedding on top. The tail is held up by a wire so udders are kept clean, meaning udder health is maintained. But mastitis still occurs and average somatic cell counts are about 200,000,” he says.

Genetics is something Mr Bos’ herd excels in, with 52 cows registering as “Excellent” and 30 “Good Plus”. Bearing in mind only 1% of cows make “Excellent” in the population, he is clearly doing something right.

“We are using Goldwyn, Baxter and Talent and use an AI technician who comes on call. We have exported live embryos from the Rose family, but this is only on demand. Bull calves are only kept when the AI companies are interested and the rest go to veal. Most sales are 90% private, selling about 25 cows a year and flushing about 2-3 a month.”

Mr Bos reckons Germany is one of the biggest markets for embryos.

Cows are fed a TMR, and cows are housed outside during the dry period and supplemented with silage and hay with all feed home-grown except for protein.

Maintaining cow health and welfare is what Mr Bos attributes to maximising his genetic and breeding success.