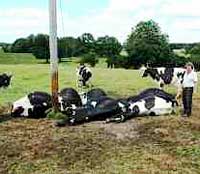 A Suffolk dairy farmer has slammed energy company EDF and warned human lives could be at risk after a tenth of his herd was electrocuted by electricity cables.

Robin Richards lost seven of his 87-head milking herd after a flock of geese flew into power lines that cross his field in Baylham, near Needham Market.

While power to the detached line was initially shut off, the system used by EDF meant the 11,000-volt current was automatically restored after a few minutes to test for faults.

In this case the cable began to “snake” when it was live, striking seven cattle where they stood in the field.

Mr Richards, who lost another cow after a swan flew into the same power lines last May, said it was only a matter of time before someone was killed in a similar incident.

“All the cows come to investigate the cable after it falls to the ground so, when the power comes back on, it wraps around the cattle and electrocutes them.

“Losing seven cows is a disaster, but if there were people around it could have easily killed a person.

“The system is an accident waiting to happen. There are hundreds of these cables across the country where this could happen again.”

Mr Richards said he spoke to EDF about cables automatically going live after the first incident last year, but the latest deaths showed nothing had been done.

“EDF has contacted me and told me to send a claim for the cows, but it doesn’t work out well for us.

“They were worth quite a lot of money – you can’t go out and buy 10,000 litre cows, they are all home-bred and they are better than ones I could buy.”

A spokeswoman for EDF said the incident was “regrettable” and “unfortunate”.

“A senior manager from EDF Energy Networks has visited the farm to speak to the farmer,” she said.

“We replaced the power line across this customer’s land with cabling which is twice the size, in terms of diameter and we are looking into the possibility of fitting extra devices onto these lines to make them even more visible to birds.

“Instances of this nature are extremely rare,” she added.

“EDF Energy Networks would like to apologise for the inconvenience caused and for the distress caused to both the farmer and to the animals involved in the incident.”