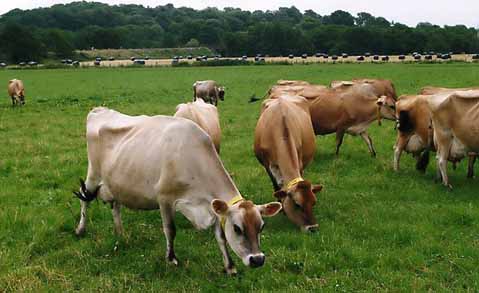 Cheese and butter producers could see carbon reduction benefits from focusing on breeding a smaller cow with better component yields.

Speaking at the British Cattle Breeders conference, Judith Capper from Washington State University said all dairy systems had the potential to improve productivity and reduce environmental impact, regardless of region, management or breed.

“This may be achieved by defining and selecting for traits that improve whole-system productivity rather than focusing on milk yield alone,” she explained.

Dr Capper said expressing greenhouse gas emissions on a “per head” basis failed to consider milk yield and other productivity indices that may have a significant effect on population size and environmental impact, including milk composition, calving interval and longevity. As such, it was crucial to look at improving whole-system productivity.

As an example, cheese and butter producers could make big improvements by selecting the right cow, something which could bring considerable benefits to the UK dairy industry, considering 32% of milk went into cheese.

Comparing the environmental impact of cheddar cheese production from Jersey and Holstein cattle demonstrated the effect of productivity characteristics.

“Jerseys have two breed advantages over the Holstein in terms of environmental impact,” she said.

“Firstly, despite their reduced milk yield, they have increased milk solids concentration (480g/kg fat and 370g/kg protein compared to 380g/kg and 310g/kg in Holsteins). This means they have a predicted cheddar cheese yield of 125g/kg versus 101g/kg of milk.”

Mature US Jersey cows also had an average bodyweight of 454kg compared to 680kg for the Holstein, so individuals had reduced maintenance nutrient requirements.

And dairy population size did not predict environmental impact for every unit of dairy, as although the Jersey population needed to produce 500,000m tonnes of cheese, yield was 9% greater than the required Holstein population – the body mass of the Jersey population was reduced by 26%. As a result, water use was cut by 32%, land use by 12% and emissions by 10% a unit of cheese yield.

She stressed this was not an exercise in saying one breed was better than the other, but instead showed the benefits of focusing future selection goals. For example, cheese producers could select for a smaller Holstein or a Holstein giving more fat and protein.