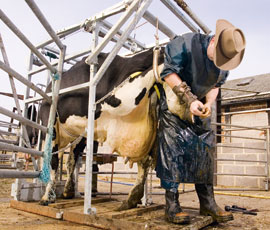 Using a combination treatments of foot trimming, blocks and anti-inflammatory drugs have proven benefits when treating lame cows, according to provisional results from Nottingham University.

The 12-month study, which was funded by Dairy Co, involved five farms with a total of 1,100 cows.

Over the 12-month period 500 cows showed some signs of lameness including sole ulcers, sole haemorrhage and white line disease. As a result 180 were allocated to one of the four study treatments.

When cows were mobility scored five weeks post treatment results showed combination treatments of foot blocks and inflammatory drugs worked better than a therapeutic trim alone, with conditions in 95% of the cows improving.

Additional treatments also had a benefit when used separately, compared with just a trim.

When a block was used post-trim three-quarter of cows were found to be better off.

Meanwhile, when an anti-inflammatory drug was used after foot trimming, two-thirds of animals were better off.

Prof Jon Huxley of Nottingham University Vet School, who carried out the trials as part of the Health, Welfare and Nutrition Research Partnership, says: “It appears that the effects of the two are cumulative, but for both treatments farmers will have to consider the extra costs, particularly for anti-inflammatory treatment.

“But these provisional results already show that even for mild cases of lameness, blocks are delivering benefits and I will be using them more frequently for milder cases than I have previously,” says Prof Huxley.

DairyCo research manager Jenny Gibbons adds: “The results have real practical application in the treatment of lame cows and the project has also shown the value of regular mobility scoring.

“On farms in the study, we saw that fortnightly mobility scoring and treating even mildly lame cows as soon as possible has the potential to halve the number of lameness cases recorded by the end of the study,” says Dr Gibbons.

Prof Huxley urges farmers not already doing so to consider regular mobility scoring, to allow prompt intervention. “Early treatment means cows recover quicker than when you wait until they are visibly lame and they are less likely to become lame in future. It will also mean less impact on milk yields and fertility.”

These findings will be assessed further to see how they can be incorporated into the protocol for treatment of individual lame cows within further herds, and into the DairyCo Healthy Feet Programme.

See our special page of news, advice and and resources on lameness in sheep