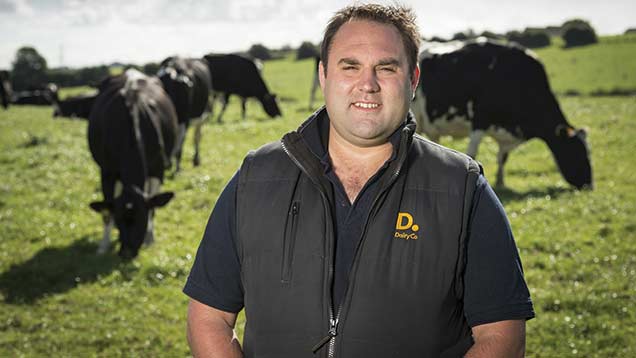 Dairy farmers looking for ways to ride out the volatile markets may benefit from hiring in or hiring out their dairy herd as a way of reducing costs or bringing in extra funds.

Tom Rawson benefitted from hiring in cows when limited funds were available following the set-up of an enterprise called Evolution Farming with his business partner Oliver Hall five years ago.

Mr Rawson and Mr Hall took on a 20-year tenancy and invested money in a new parlour, collection yard and other elements of basic infrastructure at Market Rasen, Lincolnshire.

See also: Keep up to date with the milk price crisis

But this left limited funds to spend on the actual herd so they took the decision to hire in cows as they simply could not have managed the project without them.

“If we had the money, we’d be better off buying, but it does enable you to either increase cow numbers or start up in dairy farming when other sources of cheaper finance, for example the bank, are fully borrowed.”

In the joint venture, ownership of the cows remains with the person hiring them out and a flat rental rate of 48p a cow a day is paid.

The cows’ owner pays for haulage and semen for subsequent pregnancies, while the farmer hiring in pays for all feed, bedding and veterinary costs.

The owner will also receive the cull value, should the animal be sent for slaughter.

The first cows to arrive belonged to Mr Hall, who had 50 milkers on the family farm, but could not justify the necessary investment needed to update the parlour with such a small herd.

So between Mr Hall and his family, they hired out the original 50 plus a further 100 which they purchased and these formed the herd at Evolution Farming’s new parlour.

But Mr Rawson warns hiring out cows is only one part of the solution to help cope with lower milk prices.

“Farmers must do something with the empty farm buildings and land, for example contract-rear heifers or grow forage,” he says.

So at Evolution Farming, any heifer calves born which belong to Mr Hall and his family return to their family farm for rearing.

This has allowed Mr Hall to still maximise the use of the buildings available at the home farm.

Other investors pay Evolution Farming to rear the calf for them, creating another income stream.

Now five years on, Mr Rawson and Mr Hall hire in cows from five different owners, some short term, others on long-term contracts.

“While cow hire may not directly increase wealth through increases in stock or return on capital, it has allowed us to use someone else’s capital to make the project happen.”

More recently, Mr Rawson and Hall have been approached by investors who have allowed the duo to purchase cows of their choosing, and then hire them back from the investor.

This requires a huge degree of trust by the investor as the health or productivity of the cows could soon be ruined.

However, Mr Rawson explains it is a relatively safe bet for the cow owner.

“If the farmer who is hiring goes bankrupt, the owner hasn’t lost any money – they can simply remove their stock from the farm,” he says.

“If on the other hand a sum of money had been leant to the farmer instead, this would be much more difficult to recoup.”

In the case of Evolution Farming, the cows are predominantly kept until they are culled, however it is possible for the cows to be returned to the owner after a notice period of one year.

Mr Rawson and Mr Hall make the breeding and usually choose the sire, but there is the possibility of the hirer selecting the semen.

The replacement rates and calf prices are all agreed in the contract.

The hire agreement is based on a replacement rate of 21.5%, but if this is bettered by good management, the farmer could benefit with a bonus payment from the cow owner or split it between them, so both parties win.

“When we get over this poor milk price, our plan is to own all our cows as in effect we’ve been doing a great job with someone else’s herd,” says Mr Rawson.

However, as Evolution expands on to more farms there will be more room to facilitate other people’s cows.

Hiring in or out?

Mr Rawson would recommend hiring out heifers if the dairy market started to drop, or farmers reaching retirement that don’t want to give the herd up.

“You’re better off hiring out than selling so long as there is no cash demand personally as you get 1% interest from the bank or 10% return on the investment of hired cows.”

It can still be seen as socially unacceptable to hire in, but it could be the answer to young people trying to get started, says Mr Rawson.

He also believes hiring cows can be the answer whether the milk price is high or low.

But whatever the situation, Mr Rawson advises farmers not to delay sussing out their options.

“Put the wheels in motion. It comes down to networking – speak to farm consultants, feed reps or someone who knows farmers.”