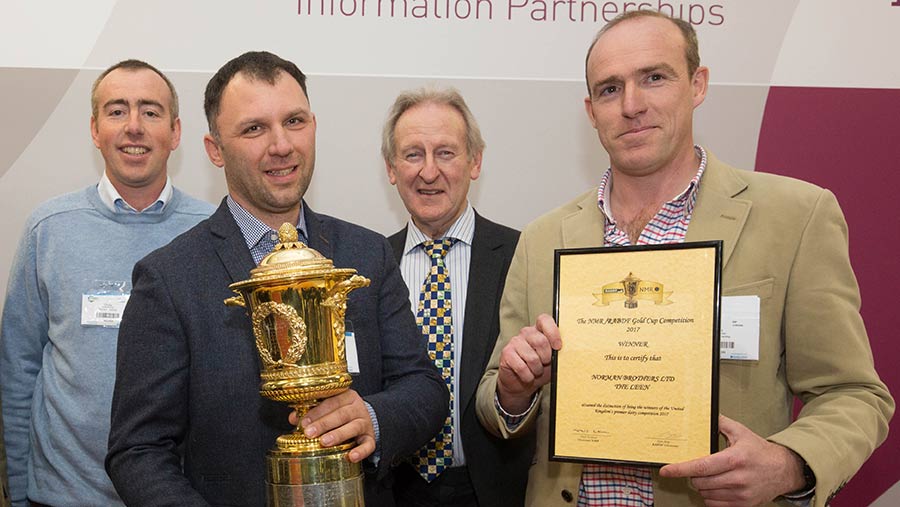 A Herefordshire dairy has become the first cross-bred, New Zealand-style herd to win the coveted NMR Gold Cup 2018 under the new-look competition.

Last year for the first time nominations for the Gold Cup were invited from national and regional discussion groups, allowing them to compete against higher-input, milk-recorded herds.

Commenting on the Normans’ success, the chairman of the Gold Cup judges, Mike King, said: “Chris and Rich have clearly shown there is more than one way to run a successful and profitable dairy business.

“Their investment in their dairy unit has allowed them to build a system that best suits their farm situation. And their attention to detail around management and staffing is of the highest level.

“This has, in turn, led to a very robust business that is able to manage market volatility and one that consistently delivers a profit.”

Picking up the trophy at Dairy Tech yesterday (7 February) the brothers commended their dairy manager Krisztian Takacs, saying he had really improved on the enterprise since joining the team in 2008, capitalising on the block-calving system that had previously been converted from a year-round-calving unit.

Chris said: “The basics of the simple block-calving, grass-based system has allowed Krisztian to get a grip on the attention to detail.”

“Krisztian’s strength is to take new ideas and concepts on board and see them executed on the farm,” added Rich.

Runners-up for the third time was the Tomlinson family from the Bilsrow herd, Preston, Lancashire.