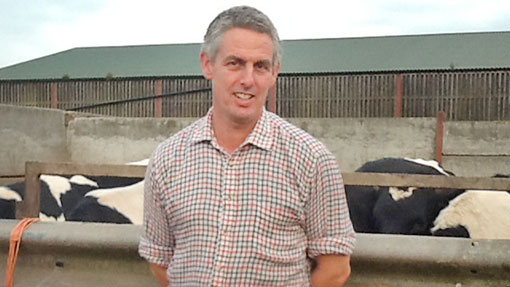 Focusing on “waste” products from the dairy and food industries has seen one Lincolnshire farmer add value to another waste product – dairy bull calves.

However, despite feeding co-products, he is one of the top-performing black-and-white bull rearers supplying the Buitelaar Group, finishing animals at 10.5 months old, weighing 450kg.

Dairy bull beef has a low capital requirement, allowing farmers to invest in what they are going to sell 11 months later, said Gary Allis, who intensively finishes 1,400 bulls– at Furzehill Farm, Bilsby.

Key to his success has been taking on quality three-week-old calves, which he says have to be right “from day one”.

Going from five calves a week in 2010, Mr Allis now receives 60 every fortnight from The Buitelaar Group.

“Handling calves in this volume means you have to have a plan, and this is strictly followed,” Mr Allis told a dedicated dairy beef conference near Stafford.

Mr Allis believes rearing his calves from a young age maximises efficiency. To feed the younger calves quickly and accurately, he has devised his own mobile tank fitted with a hot water pump and a digital flow meter.

“There are 300 calves to feed and I can do 100 in eight minutes, but I think it’s important to go around and look at them all,” said Mr Allis.

A clear health plan has also improved growth rates. Previously unconcerned about coccidiosis, Mr Allis was amazed at the difference adopting a coccidiosis drench (see Calf care below) made. “It was unbelievable,” he said.

“The last three weeks of once a day milk is when they appear to grow the fastest,” he added.

His strict approach to finishing dairy bull beef has enabled him to achieve an average feed conversion ratio of 4.6:1 and an average daily liveweight gain of 0.8kg.

The difference between his 10% youngest finished and those in the top 25% is just two weeks. But Mr Allis warned farmers against holding on to them for any for longer than 11 months.

“Make your yard work harder. After 11 months they’ve lost the battle. Feed efficiency has peaked so switch them out.”

His results have shown that at 10.5 months, bulls averaged 228kg (deadweight), while at 11 months they were only 2kg heavier.

“There is nothing more you can do to influence that animal’s margin than kill it younger.”

As Mr Allis explained, they are nearly as heavy, but have eaten a fortnight’s less feed and taken up less time and space.

“The biggest cost is feed. This will determine how profitable the animal is and it adds up to take them out younger.

“We feed co-products in a mixer wagon, there are no first use products in this system and we can still turn them into something good to eat,” he added.

Weighed on arrival, at four and 12 weeks, the calves are then left alone until 10.5 months to keep stress to a minimum. However, getting a few out of the pen as soon as possible around this age allows the others to improve their feeding efficiency.

Looking to the future, Mr Allis believes plenty can be done to improve efficiency, by finishing animals younger and heavier.

“Beef prices were through the roof when they came in, now they’re on the floor, but I’m stable and this gives me confidence to carry on. There is so much further we can go.”