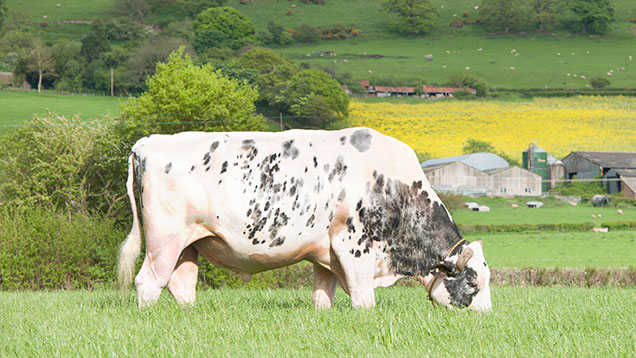 One of the greatest dairy bulls of all time Picston Shottle has passed away just months after retiring from service as an AI stud bull.

Shottle, who had been producing semen for Genus UK for the past 15 years was retired in December last year.

The bull had a major influence over the Holstein breed producing 1,174,948 units of semen.

Stephanie Whittaker, global brand manager from Genus UK said: “The peaceful passing of Shottle means we have lost one of our industry’s most influential animals.

“He has made a major impact on dairy farming around the globe over the past 15 years and has become one of the greatest bulls of all time.”

Shottle was one of the first UK bull to reach the milestone of one million doses of semen produced and sold.

He consistently ranked high on the profitable lifetime index and type rankings regardless of age and had strong characteristics such as semen fertility, production, low somatic cell counts and fantastic temperament.

Shottle was born at Spot Acre Grange near Stafford, the home of the Pickford family and Picston Holsteins.

He was the son of dam Condon Aero Sharon EX-91 and sire Carole Prelude Mtoto.