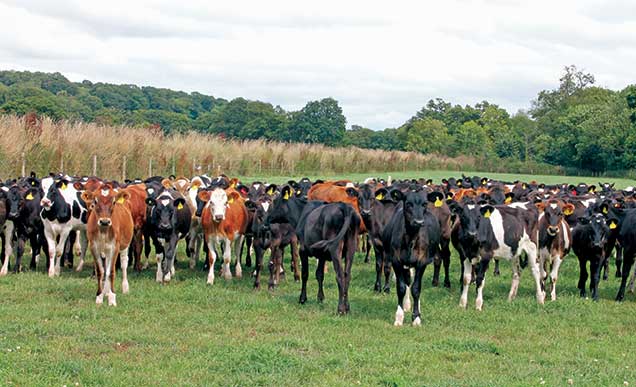 When West Country dairy entrepreneurs Neil Grigg and Tom Foot set up their dairy enterprise four years ago, they needed to keep heifer management simple due to low start-up capital.

As a result it was decided all calves from the 850-cow New Zealand cross-bred herd would be reared outdoors on grass.

See also: Find out how Neil and Tom got into milking

To ensure heifers achieve a target bulling weight of 280kg liveweight they pay meticulous attention to measuring and monitoring.

“The key to our system is getting heifers to calve by February at two years of age, so we need to give them the best start possible,” says Mr Grigg.

Cows calve at the dairy unit at Longlands Farm, Little Bredy, Dorset, in February and March, and offspring spend their first month here.

Calves are taken off their dams after two days and put into pens of 14, where they are fed cold milk ad-lib, which is gradually built up from three to four litres/day to seven litres daily. Alongside this they are offered ad-lib starter pellets, fresh water and straw.

“We ensure they get enough colostrum from suckling their mothers for two days, or they are bagged with pooled colostrum if deemed necessary within six hours of birth. Colostrum is the key to a good start,” says Mr Grigg.

“Calves are vigorous from birth, partly because of the very nature of the cross-bred animals we run. We aim to get the correct mineral balance in the cows by bolusing them at drying off and we think this also helps,” he says.

“We feed cold milk because it is easier,” he adds. The milk powder is acidified, which means it stays in suspension for up to 24 hours at a lower temperature.

Calves stay here until they return to Longlands Farm, which is managed by Mr Foot, for their second winter before calving.

The week before calves arrive at Burrow Farm milk is reduced by two litres to encourage them to eat a little bit more cake to ensure they are eating about 0.25kg cake/day, adds Mr Foot.

Upon arrival they are put into mobs of 65 and turned out onto a grazing platform of 70ha, which is broken down into 30 paddocks. Grazing covers are measured weekly and the aim is for calves to enter paddocks at about 2,400kg DM and for bulling heifers to follow behind and graze it down to 1,500kg DM/ha.

As well as grass, calves are fed five litres of milk once a day, consisting of 750g DM milk powder, using a mobile calf feeder. They are given supplementary concentrates using a snack feeder.

The beauty of the system is that it is not only simple and low cost, but it trains heifers to be aggressive eaters, ready for when they rejoin the milking herd, which are fed grass only, says Mr Foot.

“Calves are given 24-hour breaks, so they always have fresh grass, and bulling heifers come in behind them to clean up the paddocks,” says Mr Grigg.

Grass samples are taken monthly by the farm’s adviser Jeremy Kivell, from Mole Valley Farmers, in order to track protein, starch and ME levels. Supplementary feeding then is provided to make up any deficits.

If dry matter intakes are not being achieved, breaks are increased to every 12 hours, says Mr Foot.

“The biggest thing is availability,” says Adam May, beef and sheep product manager at Mole Valley. “Everyone concentrates on nutritional value, but it doesn’t matter what the nutritional value of feed is if animals haven’t got enough to satisfy dry matter intakes,” he adds.

“You see massive changes in daily liveweight gains when people put off moving cattle,” he explains.

Weighing is another important indicator as to whether or not calves are receiving adequate intakes.

Calves are expected to be eating 1kg concentrate/day before they are weaned at eight to nine weeks.

“We picked calves of all sizes at random to get a fairly good judgement of growth. We have been doing it with a weigh band,” explains Mr Kivell.

Red tags are used to help distinguish these calves from their contemporaries.

“This year we used a weigh band for the 10% group pre-weaning because of ease, but we do have electronic scales which we have used since weaning,” says Mr Grigg, who hopes to use them all the time next year.

As each calf is EID-tagged, weights are electronically recorded and the weigh head shows the daily liveweight gain since the calves were last weighed, which Mr Foot says makes the job easier.

“We have to worm them, so we might as well weigh them at the same time. If it is done as a separate job it is unlikely it would get done,” says Mr Foot.

“For the past two months growth rates have been more than 0.8kg/day and our target is 0.6kg a day, so we have been way above where we need to be,” says Mr Grigg.

Mr Grigg says weighing is key to achieving a target weight of 280kg at bulling.

Maintaining a tight calving pattern is another critical factor so that calves are born early enough in the season and have long enough to achieve target weight at bulling.

“We AI the milking cows. We serve for four weeks and serve 90% of the herd within the first three weeks,” says Mr Foot.

“We have just PD’d the herd and 86% are confirmed in-calf after nine weeks of serving. We are hopeful this will rise to 95% after 12 weeks when we recheck later on in the season,” says Mr Grigg.

He says calves born later than March are more of a challenge to get to the target weight of 280kg at bulling.

“A later-born calf is expensive to grow because it is likely you will try to push it with more milk and concentrates,” he adds.

Nonetheless, they are able to manage smaller heifers because they are tracking growth and protocols are then put in place to prevent them from slipping too far behind.

While on-target heifers are out-wintered on stubble turnips and straw, smaller heifers are housed over the winter and fed concentrate. The following spring everything is mated to homebred stock bulls.

As the stock bulls are relatively young at about 15 months of age, they run at a high bull-to-heifer ratio of one to eight.

Bulls serve the heifers in their first year. In their second year they are used in the main herd as sweepers. To prevent inbreeding, only heifers born to AI-bred cows are kept as herd replacements.

Calf health is a linchpin to achieving growth targets, with calf mortality running at less than 2%.

Calves are BVD tagged and tested at birth and receive a clostridial vaccination at four and eight weeks old.

Calves are wormed on an eight-week programme in the first season, but in the second year faecal egg counts (FECs) are conducted and animals are treated based on the results.

“As calves, the idea is they get five weeks’ cover and three weeks’ exposure so they are getting a chance to build up immunity,” explains Mr Grigg.

Keeping calves outdoors means they have few issues with pneumonia and mobile calf shelters are moved round the grazing platform with the calves, which prevents coccidiosis bacteria from building up. All this is helping to keep vet and medicine costs to £10/animal/year.

This attention to detail is helping to trim rearing costs without compromising calf performance.

Mr Foot says in the past they wouldn’t have been happy feeding milk powder that was of lower quality, but measuring growth rates has given them the drive to do it.

This year they switched from a skimmed milk powder to a whey-based one, saving £400/t.

“We bought the most expensive milk powder there was because we thought we would get better results. This year we have gone for a cheaper milk powder and we have achieved good results,” explains Mr Foot.

This is on top of the periodic savings made throughout the season by reducing concentrates fed to calves.

The smaller heifers that are about 110kg have been split into a separate group and are being supplemented with 1kg of concentrate/head/day.

But on the back of the latest grass sample, which showed crude protein was 25.9%, ME was 12.3 MJ/kg and dry matter was 20.1%, they have decided to stop supplementing the group of larger heifers that reached 140kg by five months.

“Weighing has given us confidence to wean the calves off milk or reduce concentrates because we know the calves’ weights,” adds Mr Foot.

Mr May believes more farmers can benefit from measuring.

“Here decisions are made on facts rather than gut feel. This allows us to make evidence-based decisions.”